Melodrama is blast from past 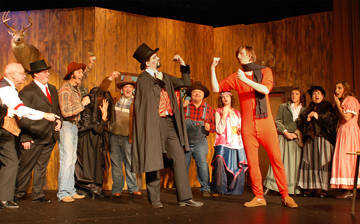 ROCKVILLE -- One of the Covered Bridge Festival's most enduring attractions, the Parke Player's annual Melodrama, has been entertaining locals, festival guests and theater lovers since 1971.

Through the years, the Melodrama has become a celebrated annual event in its own right, drawing dedicated fans from across the region. "We have our own groupies," said director Liz Woods. "Some of them know the lines better than the actors do."

This year's production is The Face on the Barroom Floor by Tim Kelly, a comedic western melodrama based on the 1867 poem of the same name.

Irreverent and full of slapstick humor, this version of the tale revolves around a tone-deaf singer and her fiancé, a color-blind artist. Their love is tested when a hard-up hussy wraps her arms around the powerless painter, and an evil theatrical producer cons the would-be singer out of a large inheritance.

A couple of dim-witted prospectors, a ghoulish widow, and a revenge-seeking Persian princess round out the talented cast of this outrageous melodrama.

At a Parke Players' Melodrama, audience members are participants, not just observers. Since the very beginning, they've been throwing coins, hissing at the villain and upstaging the actors, who often interact with audience members directly. The dialogue between the stage and the audience makes each performance fresh and unexpected. It's fun for everyone.

Andrew Snowden, estimates he has played piano for 279 Melodrama performances. Snowden took over the job as Parke Players pianist from his uncle, Bill Ott, in the early eighties, and he has been a crowd favorite ever since.

The villain for the last several years, Michael Oellig, is another crowd pleaser. Oellig, who was in a car accident on Sunday, will continue to play the role this year, despite his broken ribs and bruised lungs. "The show must go on," explained Oellig, grimacing with pain. (Audience members should not be fooled by Oellig's pathetic attempts at sympathy. He's just as vile as ever, so don't go easy on him!)

Join the Parke Players for all the fun. Shows are at the Ritz Theater, 1/2 mile west of the Square in Rockville. Remaining performances are at 7 pm on October 15-17 and October 20. Doors open at 6 p.m. and tickets are $7. For more information, visit http://www.parkeplayers.com.