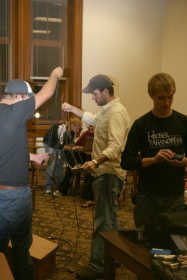 Members of the Hoosier State Paranormal have a lot of work to do before an investigation can begin. Here the group is running cable, checking cameras and making sure they have audio and video up and running.

GREENCASTLE -- Mysterious doings were happening in the East College building at DePauw University Tuesday evening as members of Hoosier State Paranormal investigated one of the oldest structures on the campus.

Located at the center of campus, East College is a symbol of the University's tradition of excellence and learning.

The bell tower houses a clock that was donated by the citizens of Greencastle and the East College bell, a gift from the class of 1879 that originally cost $350. The bell was hand rung on all special college occasions and to celebrate athletic victories.

According to student folklore, the bell tower was the site of the hanging of a daughter of one of the presidents of the University.

Tuesday night, a team of 10 members was investigating the main floor of the building, the basement and Meharry Hall on the second floor.

It took some time to run cables and set up cameras in the designated areas and to hook up monitors and computers in the control room.

Once finished, team members split into two groups, with four of them heading for Meharry Hall and another two to the basement.

Meharry Hall has old wooden blinds, a high ceiling, divided wooden pews and a balcony. It comes complete with creaks and squeaks of the original hardwood floor.

On Tuesday night, there were some additional creaking sounds coming from the stairwell reaching to the famous bell tower. Several creaks sounding like someone softly treading on the stairs was heard by the group in the hall.

Megan Soultz headed to the stairwell, calling back asking if the sounds she made were the same as those heard earlier. They were not.

When she stepped on the stairwell to the tower, the sound was the same. Her teammate Savahanna Wise acknowledged the sound was very similar. The other two people with the group also agreed.

Around the same time the two investigators in the basement recorded and actually heard a desk being scooted across the floor in the room they were in.

The control room picked up the sounds and they were able to play the scraping sound for the entire group.

It will take several days for the team to go over all the video and audio recordings taken Tuesday night during about a five-hour period.

At that time they will post anything found on their Web site at www.hoosierstateparanormal.com.

Already on their Web site are sounds recorded during an investigation of the DePauw University Library as well as sounds and video from some investigations of private homes.

The eleven-member team is made up mostly of college students ranging in age from 18 to 25. Most of the group work as emergency medical technicians (EMTs) at Putnam County Operation Life.

"When we're not doing school work, we are interested in paranormal research because we want to give people a better understanding of what it is or even, what it is not," said Founder and Lead Investigator Christopher Lien.

The group is comprised of both skeptics and non-skeptics. Their mission is to make the unknown, known. The group does not charge any fees for investigations and are willing to talk to anyone with a home or building they would like investigated.

To see what else they found at East Hall, see some of their other investigations or to contact them visit www.hoosierstateparanormal.com