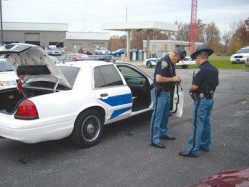 PUTNAMVILLE -- The Indiana State Police Post held its annual inspection of personnel and equipment Thursday at the Putnamville Post.

Commanders inspected the appearance, commission and equipment of forty six officers ranging in rank from trooper to lieutenant. The inspections are held once every year at all 18 state police districts.

During the inspection, each officer is personally inspected for proper grooming and uniform appearance. The officer's firearms are then examined for cleanliness and serviceability.

At the conclusion of the individual unit's inspection, the inspecting commander gave the officer a rating of unsatisfactory, marginal, satisfactory, superior or outstanding. Troopers who received an unsatisfactory rating will have to complete the process again at another district until he or she passes.

The Indiana State Police Department has a rich history in providing the best law enforcement service possible to the citizens of Indiana. In doing this, the department holds the individual officer responsible for the utmost cleanliness and care of all issued equipment.

"The results of this inspection are a direct result of the pride and dedication that is instilled into each trooper, starting at recruit school", commented Lieutenant Dan Jones, Commander of the Putnamville District.