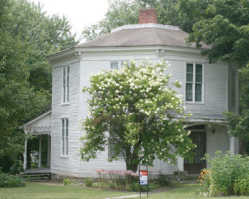 This rare octagonal home in Cloverdale is one of only 14 known to be remain in Indiana. It was built in circa 1848 as a family home and has been used as such since then.

CLOVERDALE -- There is a rare type of home located at 154 N. Main Street in Cloverdale. It is an Octagon House and is currently up for sale.

The Historic Landmarks Foundation says it is aware of only 14 octagon dwellings built during the mid-nineteenth century including this one.

The octagon house was created with the help of Orson Squire Fowler who made a fortune from the science of phrenology.

Fowler believed the octagon house promoted healthful living and he promoted it in his publication "A Home for All, A New, Cheap, Convenient and Superior Mode of Building," published in 1848.

He declared the spheres and cylinders as the most beautiful forms in nature and decided the octagon was the most practical for a house. He specified adding the advanced features of indoor plumbing and central heating.

A 2009 updated notice in engineer Robert Kline's inventories of octagon houses in the United States reports the Cloverdale home as, "a two story wood construction without a cupola. Appears in good condition."

The Jane Ross Reeves Octagon Foundation is rehabbing the house in Shirley as a community center. The house in Knightstown was moved from the town square in 1916 to the grounds around the 1844 Lehmanowsky House. Historic Landmarks members Cindy and Robert Brown, owners of the Lehmanowsky house are turning the octagon into a home office.

Numerous octagon homes have been destroyed or falling into disrepair.

Kline keeps an inventory of both extinct and current octagon houses in the United States on his Web site. Information and pictures can be found there at www.octagon.bobanna.com