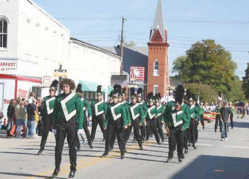 The students combined excellence in marching and playing to outdistance the other competing groups.

Being the repeat champions was especially enjoyable for senior Mark Tyler, who serves as one of the drum majors for the band.

"Having the experience two years in a row is awesome, but it isn't all me," Tyler said. "It is everyone else too. We did a great job, and I am so proud of everyone. We have all worked hard and the payoff is the joy that we feel. We will always remember this achievement."

Participating at the Indiana State School Music Association Festival Class marching Band contest, the band earned a gold rating from each of the professionals judging the event in areas of musicianship, marching, general effect of the show, and more.

One of the judges gave his best score of the entire day to the group.

Placing second out of nine groups at the Hamilton Southeastern contest was another result that the students took great pride in realizing.

The band's first field show contest was at Columbus North High School, after playing at the IU Band Day, and the group placed third in Class A out of eight bands.

Cloverdale High School will be hosting the IBA All-Region group, where 26 schools from west-central Indiana will be sending representative student musicians.