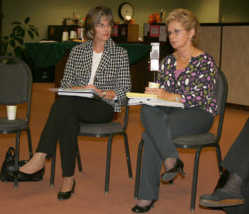 GREENCASTLE -- Local residents had a chance to talk to a pair of their elected representatives Tuesday evening at Greencastle City Hall.

While Sen. Connie Lawson and Rep. Nancy Michael were on hand to discuss a number of topics, the conversation took an expected turn -- to taxes.

Both Lawson and Michael said a big issue in the 2010 session of the General Assembly would be proposed property tax caps. Michael told the citizens she is very conflicted about the issue. While limiting the amount property owners have to pay seems like a nice concept, revenue for the state and localities has to come from somewhere.

"My ultimate concern is making sure there is a revenue stream," Michael said. "There are needs that government has to provide and it's got to be paid for."

She said tax caps would likely lead to raises in income or sales taxes.

Several of the people gathered at the event said they wouldn't be opposed to higher property taxes if it meant local government and schools would have the income to operate properly.

The event "Moving Forward in 2010," sponsored by the Greencastle League of Women Voters and the Greater Greencastle Chamber of Commerce, wasn't simply about taxes, though. Lawson and Michael spoke about a number of issues facing the General Assembly, both next year and in the future.

Lawson said one of the big issues the state faced in the 2009 session was budget shortfalls. During this year's regular and special sessions, the General Assembly had to find ways to cut $750 million from the state budget.

As the chair of the Local Government Committee, Lawson has communicated extensively with Gov. Mitch Daniels on the issue of local government reform. She said she has told the governor the issue has to be focused and pared down.

"I think the big focus is going to be on elections and townships," Lawson said. "It's not about the elected officials not doing their jobs; it's the system that constrains them from being efficient at their jobs."

Michael added to the list the issue of Sunday alcohol sales.

"My concern will be about the small liquor store business," Michael said.

Other issues likely to come up are redistricting, teacher licensing, the Family and Social Services Administration contract, sales taxes on services and ethics reform.

Besides simple discussions of the issues, though, the event was a chance for voters to hear from the legislators about what their jobs are like when they are not in session. Both Lawson and Michael are on a number of committees, with Lawson chairing the Committee of Mental Health and the Committee of Developmental Disabilities.

These committees still meet from time to time when the General Assembly is not in session.

Michael emphasized that a big part of her job is keeping up with the issues. She does so the same way a citizen can -- through the press and other resources.

"The information that we have available to us is as readily available to you," Michael said, encouraging everyone to visit www.IN.gov to educate themselves.

Both legislators also talked about their responsibilities while the General Assembly is in session. As majority floor leader, one of Lawson's responsibilities includes working out a seating chart for the senators, which can be a delicate task.

Michael is a majority assistant whip in the House, helping the majority whip determine if an issue has the support it needs to pass a vote.

Several local elected officials from the city and county were in attendance and expressed their concerns to the legislators about the upcoming session.

With a laugh, Michael responded, "It's going to be a short session. The hope is that we can't do much damage."