Carrey a surprising delight as Scrooge 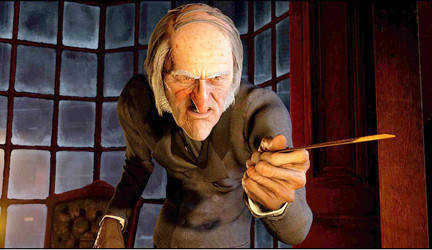 Disney's latest assault on the approaching holiday market is the CGI extravaganza A Christmas Carol, starring Jim Carrey and directed by Robert Zemeckis. The film is one of at least 20 film versions of the Charles Dickens tale and you might be surprised where this flick ranks among them.

Most everyone knows the tale of Ebenezer Scrooge (Carrey). The crotchety old curmudgeon's greedy ways have dominated his life and led him to a lonely existence on the brink of another Christmas, the holiday he dislikes the most. Christmas cheer is lost on Scrooge and his disregard for anything but the money is exemplified seven years prior when his partner Jacob Marley passes away and Scrooge plucks the coins from his eyes before the coffin maker can seal the casket.

As the ghosts reveal their lesson, Scrooge suddenly realizes that his lust for money not only has darkened his life, but those whose lives are intertwined with his.

One of those lives that are affected is his clerk's Bob Cratchit (Gary Oldman) and his family. They are a tight-knit family whose joy always has the shadow of sorrow lurking to strike. Their youngest child, Tiny Tim (Oldman), is crippled and as the Ghost of Christmas Yet to Come points his spectral finger, it finally leads back to the Cratchit household and the empty seat of Tiny Tim.

Vowing to change his ways, he wakes up and sets about his new life at the dawn of Christmas morning and his new life welcomes him.

When I heard that Carrey would voice not only Scrooge, but also all three Christmas ghosts, I cringed at the idea. But I'm critic enough to admit when I am wrong. In this instance I was very wrong.

Some might disagree, but Jim Carrey is amazing. He captures all four roles and makes each its own. This is perhaps one of Carrey's greatest performances. He doesn't have to rely on what we've all come to expect from him -- he's able to be purely an actor -- and, boy, does he flex his muscles.

It's not only Carrey, though. Oldman, Colin Firth, Carey Elwes and Bob Hoskins give wonderful performances.

But the real star of the film is the story itself.

First published in Dec. 19, 1843, Dickens' tale has been a mainstay of Christmas traditions ever since. It's a tale that continues to beg to be retold over and over again, and Zemeckis' and Carrey's version is one of the best. For an animated flick being release at the beginning of November, it conjures up the same nostalgic feel of its predecessors and gets us in the mood for the Christmas season.

Final Cut: Disney's A Christmas Carol is one of the best holiday movies in recent years. Carrey is able to once again show us he's much more than just a rubber-faced funnyman. He brings believability, soul and newness to a character that we've all known since childhood.

Plus, the 3-D technology actually works, which is a Christmas miracle in and of itself. It might be a little too dark for children, but a definite holiday season must-see nonetheless.