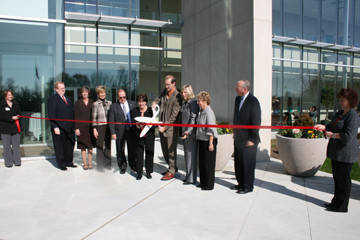 GREENCASTLE -- In 2008, Brenda Odean received her LPN degree from Ivy Tech Community College. She was proudly wearing her nursing pin at the dedication at Greencastle's new Center for Workforce and Economic Development.

"In 2002, I started taking one class at a time," Odean told the overflowing crowd gathered at the dedication ceremony.

"I decided to go back to school after having my children say they didn't see the need for a degree since I didn't have one," she said.

"I thought about it and knew I had to go back to school. It wasn't easy, but here I could take one class at a time, drop out for a while and come back. In 2007, I applied for the nursing program at both Terre Haute and Greencastle. I was accepted by both, but came to this campus," Odean said.

Pittman told the group in his opening remarks that everyone was there to recognize and celebrate the accomplishments of those involved in the journey from conception to completion of its new campus.

Today's dedication is the culmination of a dream that began in 1989 when Ivy Tech first offered classes in leased facilities. Groundbreaking for the new facility began in May 2008, and students began classes in September 2009, ahead of the predicted January 2010 completion date.

Pittman talked about conversations with then Mayor Nancy Michael, and later with current Mayor Sue Murray, about what needed to be done to get the Ivy Tech campus in Greencastle.

"Today is a day many, many of us have worked very diligently to get to," said Pittman. 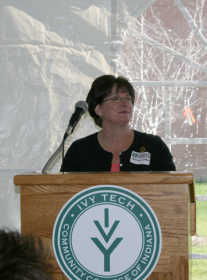 Ivy Tech graduate Brenda Odean tells a huge group gathered for the dedication at Greencastle's new Center for Workforce and Economic Development at the new Ivy Tech campus about her personal educational trip at the school.

He thanked numerous people for their dedication and work in making the dream of the school a reality.

The 32,000-square-foot structure is a state-of-the-art education and training center featuring a nursing lab set up to simulate a hospital emergency room, a student success center, a bookstore and a library in addition to classrooms, labs and offices.

The new campus has a price tag of $9.1 million attached to it. Ivy Tech officials announced that $1.75 million has been raised toward that amount.

Ivy Tech's location is at the intersection of Veteran's Highway and Zinc Mill Road where it overlooks meadows and forest areas. It is Ivy Tech Community College of Indiana's first "green campus," earning LEED (Leadership in Energy and Environmental Design) certification from the U.S. Green Building Council.

"We are very excited about this new campus and the ability to meet the post-secondary education needs of the residents of Putnam County and surrounding counties," said Tom Snyder, President of Ivy Tech Community College.

"This new campus will have a positive impact not only on the economic development of Putnam County, but also the individual achievement and career opportunities for the community's residents."

"All of us at Ivy Tech are extremely grateful to the many, many individuals who have made this new campus a reality," said Jeff Pittman, Chancellor of Ivy Tech Community College -- Wabash Valley Region.

"If it were not for the exemplary support of city and county officials, area legislators, local business and industry and many other community leaders, a new campus here simply would not have happened. Because of their vision and determination, Greencastle and surrounding communities are well positioned for the future to develop a well educated workforce."

"Today, we celebrate the partnerships that were forged to make this campus a reality and to celebrate the futures of the many people whose lives will be changed by the opportunities they find here," said Greencastle Mayor Sue Murray. 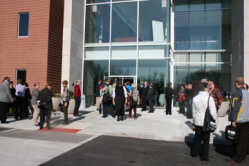 Crowds gather outside the new Ivy Tech Facility at Veteran's Memorial Highway and Zinc Mill Road in Greencastle for the dedication of the $9.1 million, 32,000-square-foot building.

Odean was quick to agree with Murray's statement.

"It's going to make a difference to so many people," she said.

Ivy Tech Community College is the state's largest public post-secondary institution and the nation's largest singly-accredited statewide community college system with more than 130,000 students enrolled annually. Ivy Tech has campuses throughout Indiana and serves as the state's engine of workforce development, offering affordable degree programs and training that are aligned with the needs of its community along with courses and programs that transfer to other colleges and universities in Indiana. It is accredited by the Higher Learning Commission and a member of the North Central Association.