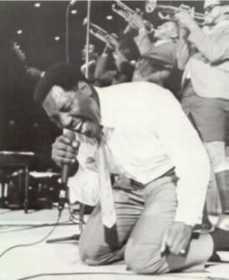 Otis Redding didn't have the best voice in soul music. He really couldn't dance. In fact, his career as a soul singer lasted less than five years.

Why, then, is Redding commonly listed among the top soul singers of all time? Otis knew the name of the game -- he had soul.

Redding's The Best: See and Hear, released Oct. 20 by Shout! Factory, gives contemporary music fans the chance to experience the best of Redding's work both in the studio and onstage.

The first part of the collection is a 12-song greatest hits compilation featuring gems like "Try a Little Tenderness," "I've Been Loving You Too Long (To Stop Now)," "Respect" and his posthumous No. 1 hit "(Sittin' On) The Dock of the Bay." It's a good place to start for anyone whose music collection lacks any of Redding's work.

But for those better versed in his work, the DVD is the real treat of this collection. It features Redding in a pair of performances in 1967. The first is from the Stax/Volt Tour on a stop in Oslo, Norway in April. The second is from the Monterey International Pop Music Festival on June 17 of the same year.

As great as Redding's recordings may have been, the chance to see him onstage, nearly 42 years after his death, is extra special. Redding didn't have the silky smooth voice of Sam Cook or the showmanship of James Brown. What he had was passion.

As Booker T and the MGs play the opening of "Shake," the opener of the Oslo set, Redding is already drenched in sweat and decides to take off his jacket. We see that he is built like a fullback ("six-feet-one, weigh two-hundred-and-ten" according the "Love Man"), and moves accordingly. He moves around the stage accordingly: constantly in motion, but lacking in grace.

However, he can't stop himself. He feels the music and his passion makes the crowd do the same. The Oslo show also features Redding's performances of "My Girl," "Satisfaction" and "Try a Little Tenderness." We also get a glimpse at some of Redding's Stax/Volt mates, with house band Booker T and the MGs' solo performance of "Green Onions" and Sam and Dave on "When Something is Wrong With My Baby" and "Hold On! I'm a Comin'."

It's a reminder of how European audiences, more so than Americans, appreciated some of our homegrown gems during soul's golden age.

The most famous performance of Redding's career was at Monterey Pop. The footage of this show gives an example of the singer's ability to work a crowd by changing speeds. He opens, once again, with a double-time of "Shake," then "Respect."

From there, though, he drops the tempo way down for "I've Been Loving You Too Long." A crowd that was raucous just minutes earlier is silent, except for the occasional cheer or whistle.

The pattern repeats itself as Redding plows into "Satisfaction," which he wrote and performed before Aretha Franklin made it a hit. He closes the set with "Try a Little Tenderness," which starts slow, but builds into the most energetic song of the set. Redding finally tells the crowd, "I gotta go, y'all I don't wanna go," before heading offstage.

The last line is almost a fitting coda to Redding's career. Six months later on Dec. 10, his plane plunged into Lake Monona in Wisconsin, killing all but one onboard.

With Redding's death coming at just 26 years of age, these two performances are some of the best glimpses we have of the artist in his prime. It's easy to ask "What if?", but the better choice in this situation is to sit back and enjoy what we have -- a true soul man.

It's impossible to find a negative thing to say about Otis Redding's music. The audio disc is a collection that's probably been done 100 times, but it doesn't make the music any less essential to any music lover's collection.

The DVD, though, is the true value in this collection. The chance to see Redding and his label mates working the stage is great entertainment. The Monterey show is one of the legendary performances of popular music in the last 40 years. It's a great addition to any collection.

The Best: See and Hear