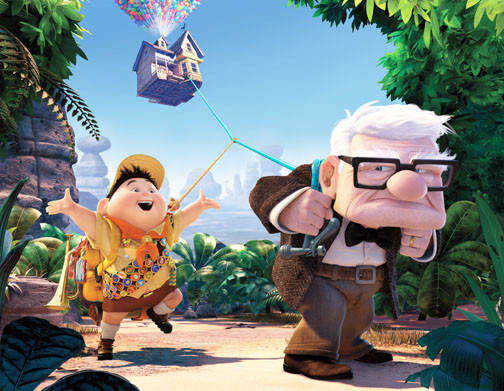 How genius is Pixar? Never in my wildest dreams would I think a film about an elderly man attempting to fulfill his and his deceased wife's dream could capture the imagination of a young audience, but UP has done just that. The animated tale of 78-year-old curmudgeon Carl Fredricksen (Ed Asner) is a delight for audiences and shows once again that Pixar is the undisputed king of animation.

As children, Carl and Ellie shared a love of adventure and shortly after the initial meeting; Ellie reveals to Carl her 'adventure journal' that she will log her lifetime journeys in. The years go by, and like so many of us, life gets in the way and the duo finds that the grand adventures they had dreamed of never came to be.

Remembering his promise as a child, Carl rushes to a travel agency and gets their tickets to South America's utopia known as Paradise Falls. It's been their dream to build their home atop the falls of Paradise Falls. Unfortunately, his beloved Ellie passes before the trip can be made and after an unfortunate incident, Carl is told he must leave his home and reside in the Shady Oaks Retirement Home.

Carl decides that he can't build their home at Paradise Falls, so he does the next best thing -- he'll actually take their home to the top of the falls by means of thousands of colorful balloons. Fredricksen is inadvertently joined by Wilderness Explorer Russell (Jordan Nagai), who was on the old man's porch as his house took flight.

After a powerful storm helps propel them to the southern hemisphere, it leaves them just short of the destination. They begin making the journey to the falls and are soon joined by Kevin, a colorful, but flightless bird Russell mistakes for the snipe Fredricksen sent him to find before their adventure began.

Carl's idol as a child was Charles Muntz (Christopher Plummer), an explorer who was discredited after returning from Paradise Falls with the skeleton of a giant bird, which the scientific community quickly dismissed as a fraud. Muntz has returned to the spot to find the bird and restore his reputation.

Carl and Russell are soon befriended by Dug (Bob Peterson), a dog who talks via a special collar and are invited to dine with his master, none other than Muntz himself. The delusional explorer comes up with the theory that Carl is there for one thing and one thing only -- to find the bird and get the glory. It doesn't help Carl's case that the bird species in question is Kevin and 'he' sits atop his colorful house.

Things quickly go south and instead of getting his house to the falls, Carl must fight to keep Russell, Dug, himself, and begrudgingly, Kevin safe from the crazed Muntz.

As with any Pixar flick, all ends well and Carl fulfills his quest without even knowing it.

UP is perfectly predictable, it has problems with story and with age discrepancies, but the flick is just too darn likeable to notice. While not excelling to the level of Wall-E, UP is an entertaining watch nonetheless.

Asner is wonderful as the elderly Fredricksen. Already known as an impressive television actor who has grabbed seven Emmys, this is by far Asner's best offering to hit the silver screen. He will next be on the big screen in Stride, set to hit theaters next year.

Equally impressive is Nagai in the role of Russell. His innocence is wonderful and he has some of the better lines in the film, like questioning whether he should dig the hole first or not. His performance also marked the first time that an Asian-American character appears in a Pixar flick. Not bad for a nine-year-old.

The disc also has some of the best bonus features I've seen in a while. From 'Dug's Special Mission and Partly Cloudy shorts' to 'The Many Endings of Muntz alternate scene', the disc has a lot more than just the film to offer. My favorite bonus feature is the 'Adventure is out There' featurette. It's a little mini-doc about the crew visiting South America and taking in the environment to capture its essence for the look of Paradise Falls.

Final Cut: The film more than lives up to the quality Pixar has become known for. It's unfortunate that as an audience, we have to rely on animation to provide us with the combo of quality storytelling and stunning visuals. UP is more than just a kiddie flick; it's poignant, touching and most of all, uplifting.

MPAA Rating: PG for some peril and action