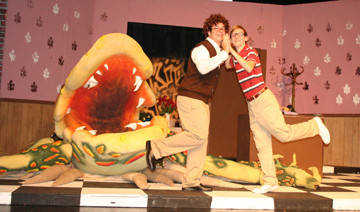 Under the evil gaze of a man-eating plant, Mr. Mushnik (Seth Miller) and Seymour Krelborn (Alex Asbell) rejoice after Mushnik asks Seymour to be his son.

Based on the 1960s dark comedy film with the same name, this musical, first produced in 1982, has received critical acclaim, won numerous awards and has become quite popular among community, high school and college theatre groups, mainly due to its star: a large man-eating plant named Audrey II, played by Kenny Buchanan (the voice) and Brockman Guinee (the body). This plant begins as a small, sickly-looking specimen that Seymour Krelborn (Alex Asbell) nursed to health with his own blood.

When the plant needs more blood, Seymour makes the heart-wrenching decision to feed Audrey II full bodies to keep him growing. He begins with Orin the evil dentist (Walter Chiarella). Next, he must trick his boss Mr. Mushnik (Seth Miller) into climbing into the plant when Mushnik discovers what happened to Orin.

Audrey II's third victim will surprise the audience since it differs greatly from the ending of the popular 1986 film version.

According to director and GHS theatre teacher Bethany Bax, a total of 73 students, staff members and parents have dedicated their time to this show. Bax hopes the community will support their hard work and "enjoy a professional-level production" this weekend.

Tickets are $5 for students, $7 for adults and may be purchased at the door or in advance from the GHS bookstore.