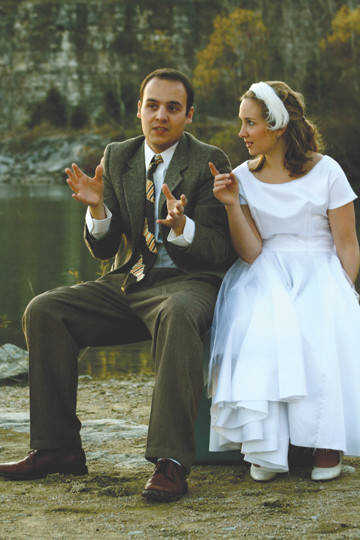 After dying in her wedding day, Eurydice ends up in the Underworld where she encounters her father.

If I were given the chance to reunite with my father in the land of the dead or stay with my husband in the world of the living, how would I choose?

More importantly, whom would I choose?

The struggle between romantic and paternal love is but one of the themes "Eurydice" opens tonight with a 7:30 p.m. performance in the Moore Theatre of the Judson and Joyce Green Center of the Performing Arts on the DePauw campus. Performances will also be staged Saturday at 7:30 p.m. and Sunday at 2:30 p.m.

While the tale of Orpheus is relatively well known, much less has been written about his wife Eurydice -- who died on their wedding day.

The DePauw outing of "Eurydice" is directed by Gigi Jennewein Fenlon.

Playwright Sarah Ruhl brings Eurydice to brilliant, sparkling life in her play. In the DePauw production, the title role is portrayed -- at times with gut-wrenching drama and at other times with adept humor -- by senior anthropology major Mackenzie Travers.

As the play opens, Eurydice and Orpheus become engaged. A wedding day accident leads to Eurydice being plunged into the Underworld, where she encounters "The Stones" -- three screeching, birdlike, masked creatures who are constantly reminding her of the rules of death; the intrinsically evil, yet strangely attractive Lord of the Underworld; and her father, who has been dead for such a long time that Eurydice has no memories of him.

I wasn't sure what to think about The Stones at first. Were they irritating? Cruel? Funny? Creepy?

In the capable hands of Jackie Keyes (Big Stone), Nikaury Roman (Little Stone) and Trisha Himmelein (Loud Stone), they were, at different points of the play, all of those things. It also struck me how difficult it must be to convey anything to the audience while wearing a mask, but all three of these actresses were able to do just that using only their voices and body language. 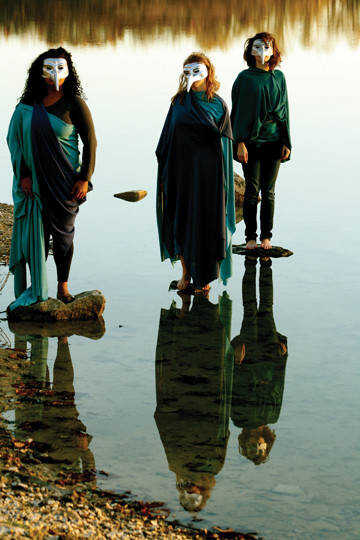 Alexander Thompson was a show-stealer in his role as Lord of the Underworld. He is cartoonish, riding a tricycle and wearing an aviator's cap at one point, coming out on stilts at another.

He is delightful in a strange way. You know he's a bad dude, but you understand how Eurydice could almost be drawn to him.

The role of Eurydice's father was created by Ruhl -- he does not appear in any of the mythology about Orpheus or Eurydice. I was amazed by senior vocal performance major Andrew Richardson's portrayal -- although he and Travers are the same age in real life, I completely bought him as her father.

As he tells Eurydice to go back to her husband, the heartbreak in his eyes was genuine.

Orpheus is played by David Kunkel. Although more of a supporting player in this story, he is still an integral part of the plot. He and Travers share an amazing onstage chemistry.

The lighting for the show is fantastic. Never overlit, the stage is often bathed in either blue or red light, depending on who is on it. The lights definitely set the moods for the show.

In the classic myths, all we really find out about Eurydice is that she married Orpheus and that he followed her to the Underworld, eventually losing her altogether. In "Eurydice," we are taken on the journey of Eurydice's experience -- a loud, colorful journey that is both funny to watch and so poignant it can almost be painful.

More information on any DePauw Theatre production can be found online at www.depauw.edu/arts/theatre.