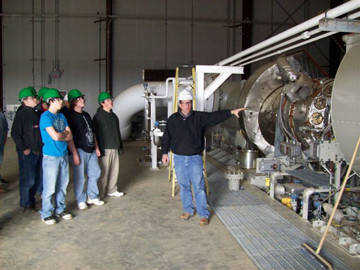 Just about one year ago, Rockies Express staff members were giving tours of the substation built in Bainbridge. This group of North Putnam High School students was one of many classes who toured the substation facility prior to its opening.

PUTNAM COUNTY--The Rockies Express pipeline that Putnam County watched being built over the past year is now complete, and natural gas is running from Wyoming and Colorado to eastern Ohio.

On Nov. 12, the final 195-mile section between Warren and Monroe counties in Ohio was finished. The $6.8 billion pipeline carries 1.8 billion cubic feet of gas, enough to heat 4 million homes, and took three years to complete. It is 1,700 miles long.

The Rockies Express project should help meet energy needs of consumers and businesses in the east. During construction, it helped buoy depressed economies in states such as Illinois, Indiana and Ohio, said Rockies Express spokesman Allen Fore.

"We came in those states with all of these construction jobs and all of these workers descending on these communities," Fore said.

The company had a large central facility in Cloverdale with workers spread out from one end of Putnam County to the other.

"Rockies gas producers can take a lot of the credit for a project that employed about 20,000 construction workers during its peak," claims Fore.

"If it wasn't for the source of the gas, there wouldn't be a Rockies Express Pipeline -- hence the name. The folks that helped produce this (gas) certainly had a role to play in helping people really all across the country in a tough economic climate," Fore said.

Wyoming gas producers and state officials are hopeful that the ability to export more gas to markets in the east will mean better prices and revenue.

Insufficient pipeline capacity is one reason prices at the Opal Hub in western Wyoming have lagged behind prices at other natural gas pricing points, such as the Henry Hub in Louisiana. The new pipeline also runs through Nebraska, Kansas, Missouri, Illinois and Indiana.

Information about the REX pipeline can be accessed online at www.rexpipeline.com