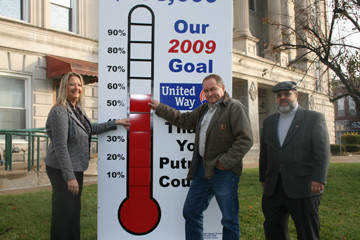 GREENCASTLE -- Just about one year ago, the state of Indiana tracked 22,002 homeless people in the state, and 4,332 were under the age of 18. During a one-year period 29,000 Indiana students are homeless at some point during their school year.

"These statistics apply to people in Putnam County just as much as any other place in the state. So many people are homeless here, and through the United Way many of them can be reached and helped," said Putnam County United Way Executive Director David English as he watched Elizabeth Butts with Family Support Services and Senior Center Director Kyle Hutcheson raise the mercury on the thermometer measuring the dollars donated to United Way this year.

Putnam County, like so many other places, has issues with providing housing, food and employment counseling for its residents. It also has agencies available to help people who need services.

"One of the many goals of the United Way is to support the agencies that provide these services to residents. Through the United Way hundreds of lives can be changed," explained English.

But with the campaign getting close to winding down, the new thermometer on the courthouse is showing just a little over 50 percent of the goal.

"We just raised it another 20 percent, but that only gets us halfway to our goal. We've had great participation from several local businesses, but we need more from businesses, organizations and the people in the community," said English.

"I know things are tough for a lot of businesses, but I hope they will stop to count the many blessings they have and help us provide housing, food and jobs to as many people as possible this holiday season. A community is only as strong as the people who live in it," added English.

The United Way provides help to several Putnam County agencies, which in turn help people in the community. English noted 95 to 98 percent of the money raised by United Way stays in Putnam County.

"This is Putnam County's United Way, it can only be as strong as the people here make it. During the holiday season it's even more important to give back to the community you live in. I hope everyone will do so," said English.

Individuals, organizations or businesses interested in helping the United Way meet its goal can contact English at 653-5638 or by email at unitedway@airhop.com