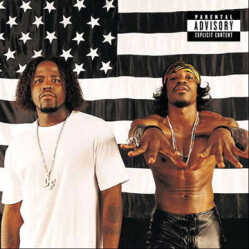 Before I get too far into this discussion, a disclaimer: I spent much of 2000 in one of my "current music is awful" phases, so my favorite album in 2000, was probably something like The Stones' Beggar's Banquet. But I don't think anybody would buy that as the best album of 2000.

With that said, though, there was still contemporary music that spoke to me way back during my freshman and sophomore years in college. At age 19, I was probably at the height of my hip hop loving. Now, there was a time in my life that rappers spoke to me, but this phase only started in about 1997 and came to an end somewhere around 2003. (I think the newest rap albums I own are the Roots' Phrenology and OutKast's Speakerboxxx/The Love Below.)

But something interesting was happening with rap around the turn of the decade. 2000 saw the release of Nelly's Country Grammar and OutKast's Stankonia, both of which became staples at pretty much every party on every campus in America.

What was so intriguing about these albums was, seemingly for the first time, the biggest rap acts in the country weren't from New York or L.A. It was like these acts from St. Louis and Atlanta could speak to me so much better than the guys from the coast. (Because, you know, guys from those places had so much more in common with a kid from Nowhere, Ind., than did the New Yorkers.)

Looking back, though, Nelly's work hasn't aged so well, though. What about OutKast? I could still listen to "B.O.B." or "Ms. Jackson" or "So Fresh, So Clean."

Released Halloween of 2000, Stankonia was OutKast's fourth album, but it was the one that truly brought them to the forefront of the world's musical consciousness. The album featured a variety of influences including psychedelia, funk, R&B, gospel and heavy metal.

It was an intelligent album that gave a nod to the past, in a genre that's all too often a prisoner of the moment. Most rap albums don't age well, but listen to this one nine years later, and it still sounds so fresh (and so clean-clean).

The hits discussed above are obvious, but dig a little deeper and we find other outstanding tracks like "Gasoline Dreams," "I'll Call Before I Come" and "Humble Mumble," among a number of others.

You also have the nice intros and interludes, a staple of any good rap album, bringing a bit of comedy between the tracks.

In then end, I won't say this was the best album of 2000, but it defines the year for me. Listening to it takes me to a time and place that means a lot to me.

Ryan Adams, Heartbreaker: Solo debut was the most consistent effort by the former Whiskeytown frontman. Suggested a talent Adams has yet to fully realize nearly a decade later.

David Grey, White Ladder: Casual listeners will remember this album largely for hit single "Babylon," but it was an outstanding effort throughout. Other highlights include "Say Hello Wave Goodbye" and "Sail Away."