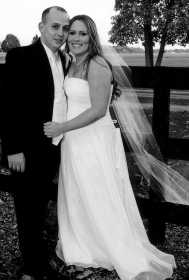 Brecquelyn Burkhammer and Everett Mucky, both of Indianapolis were married Oct. 10 in an outdoor ceremony held at Lumiere du corps in Lebanon. Rev. Robert Boyd officiated and a reception followed.

The bride is the daughter of Chris and Brenda Burkhammer of Crawfordsville. She graduated in 1997 from Tuscola High School in Illinois. She is employed at Walgreen's in Indianapolis.

The groom is the son of Ted and Kathy Muckey, Greencastle. He is a 1999 graduate of Greencastle High School and attended Ball State University and is also employed at Walgreen's.

The matron of honor was Lindsay Traylor of Zionsville. Bridesmaids were Allison Appengeller of Springfield, ILL and Nichole Kuger of Indianapolis.

Madison Copeland and Lilly Traylor were flower girls and Bryce Ramsey was the ringbearer.

The couple honeymooned going on southern states trip and now reside in the Indianapolis area.