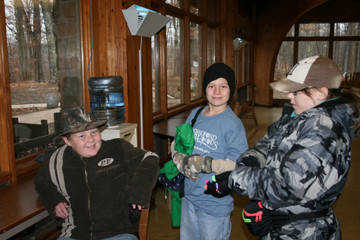 Garret Kunkler, Ayden Wheeler and Sammy Batchelor get ready to roll out on the daylong hike. The Reelsville sixth graders are on a field trip to Bradford Woods.

MARTINSVILLE -- For about 25 Reelsville sixth grade students, the three days before Thanksgiving vacation were even better than having the time off from school. The sixth grade class headed to Bradford Woods Camp last Monday morning for the annual field trip.

The group arrived at the camp in mid-morning Monday and began their move in to cabins.

When asked how their cabins were, the boys immediately launched into a story of finding a mouse in theirs.

"We saw it running around the room, Garret stepped on it by accident and picked it up and put it outside. It was fine and gone when we looked out there," said the boys.

The cabins are not the rustic ones of many campsites. One chaperone likened it to a Hyatt without a television. There are even fireplaces in the cabins.

The boys took advantage of the fireplace and had a fire before their dance Monday night. The girls, who all carry inhalers, chose not to attempt the smoke in their room.

"Four out of five of our girls have inhalers; it didn't seem like a good idea on the first night," commented Reelsville teacher and chaperone Cindy Evens.

The fourth grade teacher has been going on the Bradford Woods adventure for four years.

"I've been coming ever since my son came. It's almost more work to get together the work for three days for a sub as it is to come," she said. "But, it's a lot of fun and we have it really easy this year with only five girls."

The dance Monday night was a little one-sided with the boys far outnumbering the girls, but everybody who wanted to got to dance. They even did a little line dancing.

"I had to push a few guys out of the way to get to the girls," joked sixth grader Keaton Green. "It was fun."

Several of the boys went with one of their chaperones on a "spiritual journey" after about an hour at the dance.

"A couple of them had enough of the noise and wanted to take a walk, so we went out in the woods for a little while and then back to our cabin. We kiddingly called it our spiritual journey," explained chaperone Brian Kunkler.

Tuesday morning, after a good night's sleep, the group gathered at the flagpole and headed for breakfast before hitting the trail for an all-day hike.

As they ate, students answered questions from the Banner Graphic, whose reporter tagged along on Tuesday.

When asked what they learned Monday, one student, Dillon Devitt, began reeling off the names of numerous trees like shagbark hickory, beech and red oak. After about seven names, he paused for breath.

"I knew a lot about them before I came," he smilingly acknowledged. "I can recognize them from their bark and leaves."

"The students at Reelsville are studying about the forest conservation, the creatures that live in the woods, how trees decompose and what the soil contains," said Ilya Kolomeyets, one of the student guides from Bradford Woods.

He and his fellow guide Andrew Marsden will finish their term at the highly respected camp at the end of December.

"I'll go back to England after being here for nine months," explained Marsden. "This has been a really good opportunity for me and the best experience." 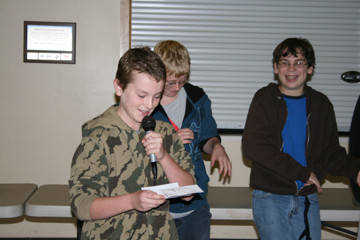 Members of the weather team give the day's forecast to fellow campers at Bradford Woods. "No sunshine, winds out of the west..."

For over five decades, the Environmental Education program at Bradford Woods has worked with students and teachers throughout Indiana, providing hands-on experiences that encourages students to learn in, and about, the outdoors.

Their goal is to enhance participants' personal relationship with their environment by increasing knowledge and awareness of environmental processes and relationships, heightening awareness of historical and cultural influences, and promoting stewardship through educated decision making.

Evidence of this is present in everything the staff does with students at the camp. From teaching environmental protection of plants and animals to recycling, the Reelsville students were immersed in the experience of the camp.

After breakfast, students prepared for their hike, which included lunch on the trail -- hot dogs cooked over a fire each group had to build themselves.

"I'm going to use sassafras branches to make my fire," claimed one student. "It smells so good."

Before they broke into two teams, the Ants and the Bison, students learned how to get zero "yuck" on their plates, how to put recyclable food and papers in the proper place and to help their "scrapper" clean up.

Before heading out, the weather team rose and gave the report for the day.

"The winds are out of the west. It's 54 degrees and no sunshine today," reported one of the weathermen.

"If it's like it is now, it will be OK to be out there, but if it pours down rain, it won't be so great," commented Alex Lesko.

All the students were looking forward to the evening's activities, which included a large campfire and a night hike where they learned about echolocation with bats and moths, moon rocks, rods and cones and even a candle trick.

Wednesday, after a short trail lesson about forest communities the group headed back to Reelsville to start their Thanksgiving vacation.

"Some of the kids from last year told us the food was awful and it took 20 minutes to get hot water in the shower and it was awful. They were just trying to scare us. I know they had as good a time as we are. The food is great, the cabins nice and warm and we're having a fantastic time," stated several of the students.

Bradford Woods is located just north of Martinsville on Hwy. 67. They can be reached by phone at 342-2915 or by e-mail at bradwood@indiana.edu. You can also visit their Web site at www.indiana.edu/~bradwood to find out more about the camp.