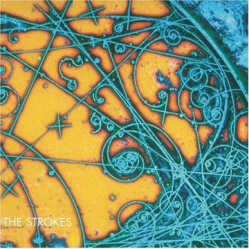 This is part two of a 10-part series on Jared's favorite albums of each year of the decade. The series will conclude with his top 10 albums of 2009.

As the millennium turned, guitar music was ill. Grunge had long since died its slow death. Alt-country never really became the commercial force it was supposed to be.

Boy bands ruled the airwaves, and bands like Creed or Limp Bizkit were the alleged "alternative."

Alternative to what, exactly?

What we need was something to save music. Like grunge had done 10 years earlier, and punk about 15 years before that, someone had to bring a no-nonsense approach to music -- just play it loud, mistakes be damned, and have some fun.

And that's where the garage rock revival came in. The sound was, once again, dirty and raw. It was smart rock, played loud and with lots of energy.

Of the many bands espousing this approach in the early part of the century, two really emerged -- the White Stripes and the Strokes.

Time has shown us that the White Stripes are probably the better band, through their six studio albums, plus Jack White's additional work with the Raconteurs and the Dead Weather, plus his production work, most notably on Loretta Lynn's Van Lear Rose.

In spite of all this, I remain a bigger fan of the Strokes. In much the same way I cling to the Stones over the Beatles, I understand the White Stripes' genius and influence, but I like what I like. I've been a Strokes guy since 2001, and I'm not ready to change.

I purchased Is This It on a road trip to visit my best friend in northern Indiana late in 2001. By the time I arrived in Rensselaer, my outlook on music had changed. Current guitar rock once again had something to say to me. Before buying the album, I knew that "Last Nite" was awesome (It was the reason I'd bought the album.), but it wasn't just one song. For 12 tracks, this album captivated me. The zenith actually came on the eighth track of the album with "Hard to Explain," the first single.

However, there's no pinning this album to simply a catch single or two. Every song on Is This It, from the opening title track, to No. 12 "Take It, Or Leave It" was more than solid.

What the Strokes gave us was a debut that was too good for their own good. When Room on Fire followed in 2003, I was disappointed. However, recent listens show me there was nothing wrong with the sophomore effort; I think my problem was that it simply wasn't the first album.

I pity band that make outstanding debuts. They seem to either spend years trying to duplicate what they had at that early stage or simply self destruct in the pursuit.

The White Stripes, White Blood Cells This was the Stripes' third album, but the first one where anyone really took notice. When we did, we knew Jack White was going to be a musical force to be reckoned with for a while.

Ryan Adams, Gold Adams' commercial breakthrough was a bit uneven at times, but the quality of songs like "New York, New York," "Firecracker," "When the Stars Go Blue" and "Nobody Girl" are undeniable. Seemed a more focused follow-up would be huge. Sadly, the albums since have fallen short.

Drive-By Truckers, Southern Rock Opera This daunting undertaking was a huge success for Patterson Hood and bandmates. They have actually become a better band in the years since, but this double album will always be among their best work.

Spoon, Girls Can Tell The first of four albums in the decade for the best band of the decade.