Albums of the Decade: 2004 -- Drive-By Truckers, The Dirty South 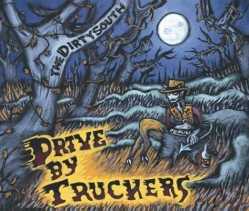 This is part five of a 10-part series on Jared's favorite albums of each year of the decade. The series will conclude with his top 10 albums of 2009.

The last decade has been good to the Drive-By Truckers. They began it in relative obscurity, but proceeded to make six outstanding records in nine years.

The first of these was a sprawling, two-disc concept album released just one day after 9/11 and the last was collection of rarities from just three months ago.

In between, they saw multiple lineup changes, ever-expanding notoriety and lots of time on the road.

Through all this, 2004's The Dirty South stands as the Truckers' best album of the decade, or, indeed, their career.

The record was their second of three with the three-headed singer/songwriter monster of Patterson Hood, Mike Cooley and Jason Isbell. While Hood and Cooley have been in the band since day one, Isbell was a member from 2002 to 2007.

Splitting the album fairly evenly (six Hood songs, four each from Cooley and Isbell), Dirty South balances out the contributions from each one fairly well. We get darkness from Hood, stark realism from Cooley and the smoother delivery of Isbell.

Much of the album, as with a number of DBT albums, is consumed by Southern mythology and demystifying much of it. Hood and Cooley's three song suite of "Boys from Alabama," "Cottonseed" and "Buford Stick" gives an alternative view of Sheriff Buford T. Pusser, about whom the 1973 Joe Don Baker flick Walking Tall was written. Hood and Cooley offer the view that perhaps Pusser wasn't such a hero. Instead, he was just as corrupt as the criminals he put away, if not more so.

The songs are very dark and gothic. You know from the beginning they aren't taking you to a happy place.

On the other hand, Isbell's "The Day John Henry Died" is more of a sneak attack. Like the Pusser songs, it tells us there's more to John Henry's story. The difference is Isbell's song is musically upbeat. It sounds happy till you listen to the lyrics.

We also get a couple of musical history lessons. Cooley's "Carl Perkins' Cadillac" tells the story of Sun Records founder Sam Phillips and his stable of early rock 'n' roll stars. Isbell's "Danko/Manuel" focuses on the two deceased members of '60s and '70s legends The Band.

Not to be lost in the mythology are some intensely personal songs. "Where the Devil Don't Stay" is based on a poem by Cooley's uncle Ed Cooley. "Sands of Iwo Jima" is a touching number about Hood's reminiscences of his great uncle. Isbell's closer "Goddamn Lonely Love," while focusing on extreme loneliness, is a love song to then-wife (and DBT bassist) Shonna Tucker.

It's these moments that put the album over the top. As great as 2001's Southern Rock Opera was, the band's sound continued to mature in the following albums. On The Dirty South they really hit their stride. It's a level they've been able to maintain in the three albums that have come since.

Loretta Lynn, Van Lear Rose: This one introduced modern rock audiences to Lynn and classic country audiences to Jack White. I'm not sure either side knew what to make of the other, but the collaboration worked wonderfully.

The Killers, Hot Fuss: From the first time I saw them, I wanted to dislike the Killers. I couldn't. "Mr. Brightside" is an amazing song, and "All These Things That I've Done" is a close second on the record.