Albums of the Decade: 2006 -- The Decemberists, The Crane Wife 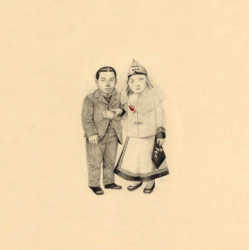 This is part seven of a 10-part series on Jared's favorite albums of each year of the decade. The series will conclude with his top 10 albums of 2009, which will be published in the Dec. 31 edition of the Banner Graphic.

When I picked up my copy of the Decemberists' The Crane Wife in late 2006, I really didn't know what I was getting. I'd read an article or two on them and I understand that their look and sound was supposed to be reminiscent of the 1800s.

That was pretty much it. But I took a chance. I thought I might get a song or two out of it.

What I got was a musical experience I'm still wrapping my head around three years later. It's probably unfair to describe The Crane Wife as a rock opera because it isn't exactly rock. But this particular record features multiple variations on the same theme ("The Crane Wife" parts 1, 2 and 3, but not in that order), two multi-movements songs that measure in at 11-plus minutes and a closing track with a rousing four-part round ("Sons and Daughters").

These aren't things that are supposed to happen on indie rock albums. Then again, if you choose to describe the Decemberists as baroque pop or progressive rock -- which both also fit -- I suppose the possibilities open up.

The album is based on an old Japanese tale about a man whose greed eventually destroys his wife's (secretly a crane) health and finally breaks the spell and makes her turn back into a crane.

The problem with a lofty concept album is the small ideas (the songs) often get lost in the larger concept. This happened to The Hazards of Love, the Decemberists' 2009 follow-up. There's no such problem here. While the story and album work wonderfully as a whole, there are also some individual songs that are outstanding, including "O Valencia!", "Yankee Bayonet" and "Sons and Daughters."

Songwriter and general idea man Colin Meloy does a wonderful job mixing in the individual gems with the larger story, and it all seems to work in this case. It is hard to see, though, where the ideas come from. "Yankee Bayonet" is a series of letter between a Civil War soldier and his girl back home. "O Valencia!" tells a story reminiscent of Romeo and Juliet. "Shankill Butchers" would best be sang around a campfire as a cautionary tale to misbehaving youngsters.

And it's captivating throughout. That's what's really important. Sometimes when artists make concept albums, the seem to forget the big concept is entertainment. Meloy remembered that when he crafted this one.

Amy Winehouse, Back to Black: Sure, Winehouse's perpetual drunkenness made her a punchline for a while and has now left her almost forgotten. But we shouldn't forget how good this album still is.

Drive-By Truckers, A Blessing and a Curse: Yet another strong outing from the boys from Alabama. "Goodbye," "Easy on Yourself" and "Gravity's Gone" are all epecially nice.