Spaceballs: Totally not worth it 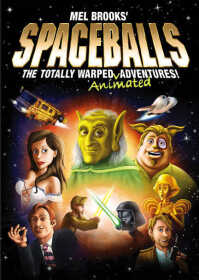 Sometimes an idea is better left alone. That was never more apparent than when I popped in the DVD for Spaceballs: The Totally Warped Animated Adventures. Having loved the source material for years, I can't recall laughing one time while watching the disc.

The Totally Warped Animated Adventures consists of four episodes: Deep Ship, Outbreak, Grand Theft Starship and The Skroobinator, with the writing being supervised by Spaceballs mastermind Mel Brooks. He also reprised his roles of President Skroob and Yogurt for the series.

I can't name you how many classic lines and moments from the original film that left me in stitches for years. There were two instances in the four episodes that I smiled and never did I utter a laugh. It's sad really.

It's surprising how poorly written the episodes are. The movie relied on some very clever dialogue and that's something glaringly absent from its television counterpart. It's more juvenile in nature than sophisticated and satirical.

Final Cut: Don't waste your time with Spaceballs: The Animated Adventures. It offers nothing in the way of expanding the universe and does more harm than good. A definite disappointment.