Blue Door back in business 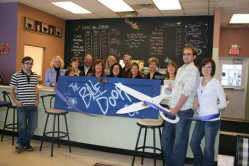 GREENCASTLE -- The Blue Door Cafe is once again open for business and offering their specialty coffees and baked goods at their new location on Washington Street.

The menu has been simplified with the baked goods prepared by the Scholars-Inn Bakery in Bloomington. Beef stew and a chicken salad wrap are the only non-bakery items currently being offered.

A full array of coffee and teas are available.

"We're glad to be back and proud to be able to provide DePauw students, staff and local residents with another venue," said Furr.

Owner Dennis Furr who is a DePauw graduate from the class of 2002 opened the Blue Door in August, 2007 on Indiana Street, but was forced to shut down the coffee shop in May 2009.

Furr is renting his new property from DePauw University, and believes the new location along with the menu change and plans for future music venues will help the coffee shop prosper.

Furr and his partner Kate Durham are planning a grand opening at the Blue Door on March 1 from 6 to 9 p.m. The public is invited.

"We'll start having open mic night on Wednesday in March and then adding musicians as they are available," said Furr.

The coffee shop is open from 7 a.m. to 11 p.m. Mon. to Fri. but closed between 1 and 4 p.m. Saturdays they are open in the mornings until early afternoon and on Sundays are open in the evenings.