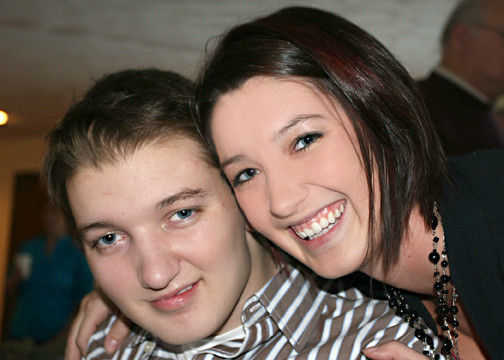 The last two years have been tough for Drew Christy, but he and his supporters, like sister Kaila, have stayed positive throughout his recovery.

FILLMORE -- Today is the second anniversary of the event that forever changed the lives of Drew Christy and his family.

On Feb. 22, 2008 Drew was driving by himself east of Manhattan Road on U.S. 40 when his 1999 Pathfinder hit a patch of ice and crashed into a tree. Drew, a 2006 South Putnam High School graduate, who had been a star athlete and exemplary student during his tenure there, was heading home to Fillmore after completing a semester at Rose-Hulman Institute of Technology in Terre Haute, where he was a sophomore engineering major and a member of the football team.

Drew sustained massive closed head and chest injuries in the crash. He was in a coma for four months, and doctors were not optimistic about his chances for survival, let along recovery.

But Drew did survive. He has overcome hurdle after hurdle, and continues to grow stronger.

"He continues to progress," said Drew's father Mark. "But it's a gentle incline. It's nothing rapid."

Mark describes Drew's condition as "the same, only better."

Drew, who turned 22 on Dec. 8, has been at home since Nov. 1, 2008. He spent four weeks this past June as an inpatient at Rehabilitation Hospital of Indiana in Indianapolis, and in November underwent a series of hyperbaric oxygen therapy (HBOT) treatments.

HBOT treatments are delivered in a hyperbaric chamber. Patients are given pure oxygen at a higher level than atmospheric pressure.

Drew's parents took him to Cincinnati every Thursday and stayed through Sunday for 10 weeks, and Drew received four to six HBOT treatments each time.

"It's made an amazing difference," Mark said. "It's removed a lot of the spasticity from his system."

Since the HBOT treatments, Mark said, Drew has become able to propel his wheelchair on his own and hold up his head better.

"His pain level is down," Mark said. "We'll do (HBOT treatments) again this spring, but we had to give him a rest."

Drew still can't speak, but Mark said he communicates quite well in other ways.

"It's tough," Mark admitted. "But it's just amazing that he's awake. As difficult as it is, we're pretty joyful about it."

Although two years have passed since his accident, those who knew Drew -- and even many who didn't -- continue to be interested in or involved with his recovery. On Sunday, a praise and worship benefit concert for Drew was held at New Providence Baptist Church, where they Christy family are members.

Drew was a member of the church's worship team at the church, and it was that team that spearheaded Sunday's event. 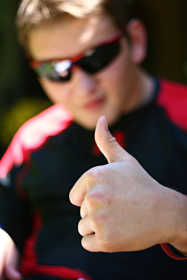 No matter what life has thrown at him, Drew has kept pointing up.

"It is amazing," Mark said. "It's so easy to be emotional about something initially, but that tends to wear off and you kind of move on to the next emotional thing. It's two years later, and people are still just as involved with this now at they were at the beginning. It's really a testimony to the level of commitment Drew had to the things and people he was involved with before the accident. To have good friends, you have to be a good friend, and there are people who, from the start, have been so in tune with what's going on with Drew."

A couple of Mark's former teachers and coaches, their spouses and some of Drew's family members and friends are among those who come regularly to the Christy home to help with Drew's physical and developmental therapy. The basement of the family home has been set up with a hospital bed and other equipment, and is where Drew and those who help and take care of him spend much of their time.

Mark, a self-employed software developer, is at home during the day, and although Drew has nursing care Mark is always available for his son.

"After a long day in the basement, it's just so great when someone shows up to help," Mark said.

For as much of a tragedy as it was, Drew's accident turned out to be a way for Debbi to get to know her son even better than she had before.

"I am continually astounded by the stories I hear about my son," she said. "I get to know him better and better."

Just in the last three weeks, Drew has begun eating solid foods. And in light of the fact that he spent nearly the past two years getting his nutrition by way of a feeding tube, Debbi pretty much lets Drew eat what he wants.

On Sunday, he wanted fish from Long John Silver's. He has also requested Big Macs from McDonald's and tacos from Taco Bell.

"I don't care what it is, he can have it," Debbi said with a laugh. "I do feed him healthy things too ... I try to keep it balanced ... but if he wants Taco Bell, bring on the Taco Bell."

The first solids Drew was given were baby food.

He was not impressed.

"He didn't like that at all," Debbi said. "He'd tell me know and make all the faces. This is a college guy. He likes spaghetti and lasagna."

The Christys are grateful for every obstacle their son conquers, no matter how small.