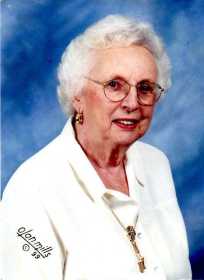 Bula was born June 7, 1922 at home near Madison in Jefferson County. She was the daughter of William F. and Hallie Dunaway Butler. She was a gracious lady, an astute businesswoman, a kind and generous volunteer with both her time and her money, and an example and inspiration to her many friends, relatives, and colleagues.

She was also a beloved mother to her three daughters.

Bula grew up on a dairy farm, and was graduated from Central High School in Madison on May 8, 1940. She attended Purdue University, but left at the outbreak of WWII to serve with the U.S. Civil Service as a junior engineer testing munitions at the Jefferson Proving Ground near her hometown.

At the age of 20, Bula became the first woman to take the oath of office as a WAVE in Louisville, Kentucky. She served her country in the Navy as a gunnery instructor stationed at the Deland Naval Air Station in DeLand, Fla.

After the war, she attended merchandising school, learning her trade in Indianapolis and Kansas City. Bula returned to Madison in 1951and opened her first store, The Town Shop, on Main Street. In 1961 she married Carl Theodore "Ted" Renne and adopted his three children, Karen, Sally, and Margot. She and Ted moved her store to a larger building and renamed it Bula's, Inc.

In 1972 she was widowed, and later married Dr. Melvin Keeton. Bula was widowed again in 1977. In 1981, she sold Bula's Inc. and a year later opened the first antique mall in southern Indiana.

In 1995, after years of wintering in Florida, Bula made Florida her permanent home. She moved to her apartment at Countryside Lakes in Port Orange in 2004. She was a member of Westminster-by-the Sea Presbyterian Church.

She was also preceded in death by her brother, Buford Butler and her beloved niece, Debra Butler. She is survived by her daughters Karen (Jim) Burkhalter of Ponce Inlet, Fla.; Sally (Allan) Murphy of Bloomington and Margot (Jim) Payne of Greencastle; her brother Bill Butler of Ocala, Fla.; and six grandchildren including Renne and Ryan Payne. In lieu of flowers, donations can be made to the American Cancer Society or to Odyssey HealthCare, Daytona Beach.

Condolences can be sent to www.lohmanfuneralhomes.com.