NeedToBreathe cranks up the live set 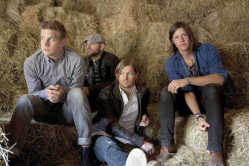 A decade into its career, NeedToBreathe has more momentum than ever, with a hit record in "The Outsiders" and an energetic live set. (Courtesy of Atlantic Records)

INDIANAPOLIS -- In interviews, the members of rock band NeedToBreathe often return to the subject of how they've built their audience over the years. A decade of almost constant touring has built their fan base in a much more personal way than have the three studio albums they've released on Atlantic since 2006.

"We played here in Indianapolis to 50 people and then 100 people an it just grew and grew to what it is here tonight," Rinehart said.

What was there was a crowded room of fans on a night it would have been easy to stay home. It was a nasty March evening -- a night reminding everyone it's still early spring.

It was a night when the biggest story in the city was not a rock show, but the Butler Bulldogs upset of Syracuse.

Yet with these distractions and excuses, the fans still came.

As expected, the boys from South Carolina made it worth their time. They continue playing bigger venues in the city (going from Radio Radio to the Music Mill to the Vogue in just their last three stops in the city), but continue to find ways to connect with the fans.

The band pulled one of its patented tricks Thursday by unplugging from the amps to close the show. Having played their regular set and two songs of the encore, they asked the crowd to get quiet for a truly acoustic number.

Brothers Bear and Bo Rinehart moved to the front of the stage, each with an acoustic guitar in hand. Drummer Joe Stillwell, bassist Seth Bolt and keyboardist David Leonard were just behind, each providing percussion.

The band delivered "Washed by the Water," one of their most beloved and heartfelt tracks. In a room of hundreds of people, it was amazing to hear the unamplified voice of one man over a few simple instruments.

After the softest guitar solo one could ever hope to hear, the crowd joined in to close the show together.

But while one of the band's strengths may lie in these quiet moments, another is in its volume. Songs with a pop-rock feel on the album are rockers in concert. The band kicked off the encore with "Hurricane," featuring a much more raw guitar sound than the song even approaches on last year's "The Outsiders."

Likewise, "Something Beautiful," "Lay 'Em Down" and "Through Smoke" closed the regular set with a volume unimaginable to anyone who's heard the band but never seen them in person.

The bottom line is, this band continues to get better. Their sound on albums is catchy and fun, but the live show is where they do the best work. Watching them even for one song, it's obvious they truly love playing together.

The feeling translates to the audience.