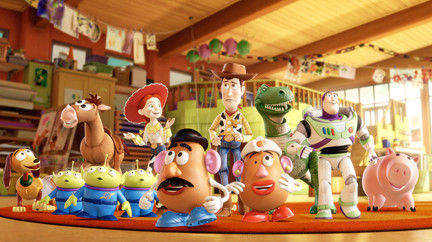 Woody, Buzz and the rest of the Toy Story crew are back again with the release of the Blu-ray and DVD Disney packs that just hit shelves. Of course, the two flicks come out in support of the upcoming "Toy Story 3" that's slated to hit theaters on June 18.

For anyone who hasn't seen either of the two films, just stop reading right now. This is not the review you're looking for. I'm going to avoid reviewing the films for the 100th time and focus more on the special features and other goodies the disks offer.

First off, the presentation is amazing for both films -- crystal clear and amazing audio. I was actually surprised how good both elements were. I checked out the DVD versions of the films and if that's any indication of what the Blu-ray versions will look like -- be prepared to be blown away.

There's tons of extra features on each movie, so even if you own previous versions of the films, do yourself a favor and upgrade.

Again, there are three "Studio Stories", which include "Toy Story 2" Sleep Deprivation Lap, "Pinocchio" and "The Movie Vanishes".

Most of the time with animated films, the extra features are not much to look at, but in this case I highly recommend checking the goodies out. You find out some interesting things that you didn't know and that's the best extra features can achieve.

Both disc sets come with a "Movie Ticket Offer" that is good for up to $8.50 at participating theaters for the upcoming "Toy Story 3".

That being said, I'm extremely excited for the release of the newest installment of the franchise. When it was first announced, I thought to myself, "How are they going to keep this fresh? How long can this ride last?" Well, leave it to Pixar to answer that question loud and clear.

In this third film, Andy is no longer a kid, he's a young man headed for college, and like we've all done reluctantly at some time in our lives, chooses to part with his toys. The toys end up at a daycare and try to break their way out.

The film will be presented in 3-D and will also have a run on IMAX. Plus, all the voice talent is back including Tom Hanks, Tim Allen, John Ratzenberger and Wallace Shawn.

Final Cut: As I said before, even if you already own these movies, toss them out, give them to your kids, let the dogs have new chew toys and buy these discs. The movies are beautifully presented and the tales are timeless. Plus, you get a free ticket to the new flick, and who doesn't like saving some dough?