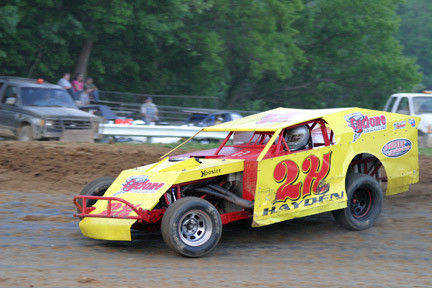 PUTNAMVILLE -- Sunny, clear skies greeted fans on Saturday night at beautiful Lincoln Park Speedway, and the pits were jammed with drivers anxious to put on a great show in search of the checkered flag.

Thirty-nine sprint cars unloaded this weekend and with defending champion and current points leader Shane Hollingsworth piloting his USAC Silver Crown car in Iowa, a new driver would take home the winner's share of the purse.

The sprint features have provided some of the closest finishes all season long and this week was no different.

Dickie Gaines had some bad luck in his heat race, but was on a rail in the second of two B-Mains to earn the win over a very fast Russ Harper. Kenny Carmichael Jr. claimed the first B-main ahead of Chase Stockon.

At the drop of the green, Holtsclaw showed he would be tough to beat as he drew out to a four-car length lead over Jesse Cramer with Bland and Welpott battling in front of A.J. Anderson.

Holtsclaw would maintain his lead until, seven laps into the main event, Shawn Krockenberger got upside down coming out of turn two. Krockenberger wasn't injured in the incident that brought out the red for a stoppage.

On the re-start, Holtsclaw maintained the point, but Gaines was making some noise after rocketing forward from 18th starting position to 10th. However, Link's strong evening came to a close with a flat tire and he headed to the pits.

Once the green waved, Anderson began to make his presence felt amongst the leaders, challenging Bland on the bottom near the mid-point of the feature. Anderson finally made the pass stick as Bland smacked the cushion in turn two and lost some ground as Cramer and Ty Deckard got past. Bland's night would come to a premature end shortly afterwards as a flat right front tire caused him to spin.

When the field took the green again, Holtsclaw would have his hands full with Anderson right on his tail tank. Holtsclaw took the high line around the rim with Anderson finding good bite on the bottom as the laps dwindled. With four laps to go, Holtsclaw held onto the lead ahead of Anderson, Cramer, Deckard, Gaines and Kent Christian with Justin Marvel in tow.

As the white flag came out, Anderson made his last attempt at the lead, pulling nearly even on the bottom alongside Holtsclaw. However, the SM Sprint Mart, Holtsclaw Painting-sponsored No. 3 of Holtsclaw held onto the momentum and outraced Anderson to the finish line by several feet.

Twenty-six UMP Modifieds were in the pits Saturday night, all chasing an elusive feature win.

Brian Hayden, after some mechanical problems a week ago, started the night fast with a heat race win over current points leader, Paul Bumgardner. Travis Shoulders claimed the first heat of the night with Chad Combs topping Rob Fuqua in the second heat. Josh Boller outdistanced the field to claim the B-main victory.

In the feature, Hayden jumped out front early ahead of Shoulders with Carlos Bumgardner and Craig Conyer close behind. A clustered battle for position developed behind Bumgardner with Chad Combs and Shoulders wrestling for third as Conyer and Fuqua had a side-by-side tussle going on behind them.

Hayden put a couple car length lead on Bumgardner, who was being challenged by Shoulders before a caution re-set the field.

On the re-start, Hayden maintained his lead in the Cyclone Custom Products, Racin' with D.O., IndianaOpenwheel.com-sponsored machine. Shoulders showed his nose to Hayden a couple of times as Bumgardner was holding off Conyer and Paul Bumgardner with Combs and Fuqua close behind.

With one lap remaining, Shoulders got one last shot at Hayden before an apparent mechanical issue saw him slip to seventh at the finish. Carlos Bumgardner settled into second ahead of Paul Bumgardner with Combs and Fuqua in the top-five. Wes McClara blasted through the field from 18th at the start, to sixth overall. Derrick Hufford was eighth ahead of Dan Lewellen and Brad Robinson.

In the UMP Super Stock feature, Kenny Carmichael started up front alongside Tony Anderson with Paul Bumgardner and Josh Burton behind them.

On the green, it was Carmichael wholed early as an early spin sent Anderson to the back to try and make up some ground. Carmichael led the first handful of laps as Bumgardner made things difficult despite his own battle with Burton. Slick Griffin moved into the mix as he raced with Doug McCullough for position. However, Griffin and Carmichael would tangle shortly afterwards and result in the two being moved to the tail.

Bumgardner took over the point and got all he could handle with points' leader Chris Hillman as Burton gave chase. Bumgardner was able to build a small lead down the stretch in the Fleetwood Construction-sponsored machine. Hillman duked it out with Burton to the wire before claiming second by a nose at the finish. Danny Harris came home fourth ahead of Brett Smedley and Kris Starks. Jim Moore took seventh with Anderson moving up to eighth after the early spin. Griffin came home ninth and Carmichael Sr. was 10th.

In the bomber class, Dustin Shoulders brought home a nice payday as he pocketed the win and $100 in the Dash for Cash put up by flagman, Mike Johnson and then went on to score the feature victory as well.

Shoulders held off the hard charging, David Bumgardner down the stretch as Jordan Almanza took third. Lloyd Walls and Marlin Burns put on a side-by-side show over much of the second half of the feature before Walls took fourth. Ron Wallen Sr. moved through the field from 15th to sixth ahead of Barry Hicks and the B-main winner, Dale Lewis. Richard Watkins and Blake Cross wrapped up the top-10.

Next week will be a regular show of sprints, modifieds, super stocks and bombers.