A peek into Bainbridge's history 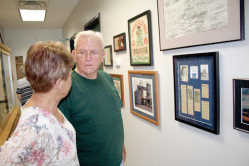 Chyril Hoke and Paul Smith discuss a display about Smith's experience in World War II at the Bainbridge Community Center Sunday. Smith was a pilot who was held as a POW during the war.
Order this photo

BAINBRIDGE -- It was a simpler, quieter time. Well, perhaps not quieter.

The Bainbridge Improvement Society (BIS) hosted an open house on Sunday at the Bainbridge Community Center to unveil a collection of artifacts from the town and Bainbridge High School. As memories flowed, the picture they painted was not one of a quiet, pastoral existence, but of a hopping little town with an economy unto itself.

"It was a fun place to be," said Ernestine Judy, the oldest living native resident. "On Saturday night, the town would be full."

There were movies in the middle of town on summer evenings and a Christmas tree in December. There was a grocery store, a drugstore, hardware, a jeweler and even a roller rink. Most of these things can now only be found by driving to Greencastle, Danville, Avon or Plainfield.

Patsy Hanks McCammack's parents owned the drugstore and grocery store and would sell most things one might need.

"Anything you wanted in the drugstore, you could go find it there," she said.

None of this is to say the thriving town wasn't still prototypical small town Americana.

Not only was this picture painted in words, but in physical reminders of the past. A new display case now occupies one side of the hallway across from Town Clerk Jason Hartman's office. Old newspaper articles, books, photos, trophies and other antiques serve as reminders of days long gone.

But as great as all the artifacts are, the real treat of Sunday was the conversation. A number of stories were told about how people came to be in Bainbridge. While some families have been in the area for 150 or more years, others have woven themselves into the fabric over time.

Thursa Evens' mother Rosetta came to Bainbridge from Illinois when she was a teenager. She came with her oldest brother as his daughters' caretaker, following the death of the brother's wife. Ironically, Rosetta's maiden name was Evans.

At church one Sunday, she met Ray Etcheson. The two later married and raised four children.

One of Evens' memories of her father and uncles was their nicknames. Ray's nickname was "Dick," and each of his brothers had two names he might be called.

"I was always confused," Evens said.

The unifying theme throughout the day was how proud everyone was to be a member of the community. While some never thought of leaving, others wanted to or even did for a time. All seemed to be glad to be where they are right now, though.

"I was born here, and I guess I'll die here," Jackie Fowler said. "I don't know if there's a better place to die than the town you were born in."

The display of historic artifacts can be viewed during the town hall's normal business hours, from 8 a.m. to 5 p.m. Monday through Friday.