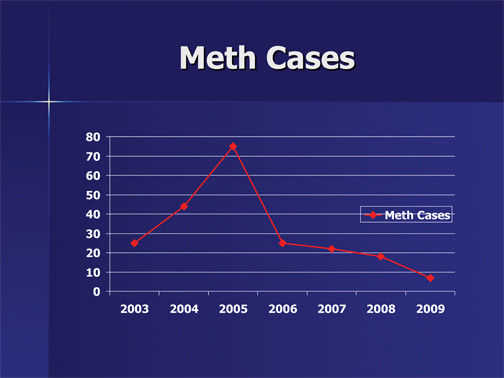 "From 2003 to 2005, meth cases really doubled each year in Putnam County. We implemented the "Stop Meth" program in the spring of 2005, and the Meth cases have fallen each year since then," said Bookwalter.

The "Stop Meth" program targeted meth dealers and "cookers" with long prison sentences, and short-term jail for users followed with a daily treatment program for users similar to Alcoholics Anonymous.

"Addiction experts told us that to treat meth users they really need about 60 days of incarceration before they are ready to accept treatment. Treatment needs the reinforcement of daily group meetings," said Bookwalter.

"It has certainly helped to put Putnam County's meth dealers in prison for lengthy prison sentences, but I believe the biggest reason for our success has been the public's awareness of the dangers of meth. With the help of all four school corporations, we have all preached hard to the students to stay away from meth. The statistics that I am most proud of is that we have not had a meth case in Putnam County with school-age kids," said Bookwalter.

The other big help to the "Stop Meth" program has been the new law that restricts the sale of pseudoephedrine that was initiated by Governor Daniels.