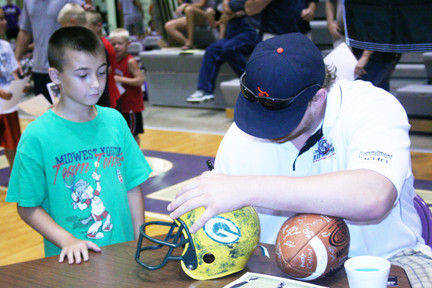 The Tiger Cubs, who are coming off a 1-9 season, needed to hear just that.

Land talked about how he had been told throughout his career he wasn't able to accomplished the goals he set for himself and how he used the criticism to motivate him to excel.

His message of moving beyond the past and overcoming anything thrown in one's path was delivered to a crowd who silently sat and took everything in.

As his talk came to its end, Lang looked around to the GHS football players in the crowd and gave them one instruction.

Lang's message is one he likes to get out as often as possible to illustrate what a person can achieve if they believe in themselves and do the right things along the way.

"I've spoke to a few schools before and each time I go, I try to give a little different message, but to these guys I just felt I had a unique story about how I got to where I'm playing now," Lang said. "These guys are at an age they understand the message I'm trying to give to them and understand that there's going to be obstacles and adversity in your life.

"One of the things I always did was take it head on and great things have happen to me so far," he added.

He also spoke about what the players themselves will need to do to make the 2010-11 campaign a successful one.

"First of all, it's always tough when you get a new coaching staff," Lang commented. "Trying to learn a whole new system, but the faster they buy into the coaches and realize that they know what they're talking about, they're going to learn a lot from these guys and the quicker they're going to be able to turn it around.

"I went through a coaching change in college and even when I transferred in high school, I had to face some challenges there. As long as you surround yourself with the right group of guys and really listen to what the coaches are telling you. Buy in and stay committed and good things are going to happen," he said.

Lang has some personal ties with the new GHS coaching staff as well. Assistant coach Josh Buis, a graduate of South Putnam and DePauw University, was his coach at Eastern Michigan, and Lang had nothing but great things to say about his former coach.

"I can tell you, coach Buis is one of the smartest coaches I've ever played around. I'm talking about every level of football I've played," he said.

Following his message, Lang took some questions from the crowd that ranged from his playing weight in high school, who would win between the Packers and the Colts and the toughest player he's faced in the NFL.

To the last question, there was little hesitation before his response. He pinpointed Minnesota Vikings defensive end Jared Allen as having quite a mouth on him, but having the talent to back him up.

The group followed the players outside to Harbison Stadium to watch the team practice and run drills.