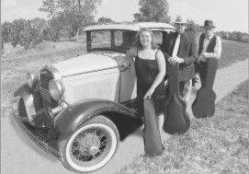 The band No Criminal Record will be the first musical performers featured in the inaugural house concert series at Heritage Lake.

The band No Criminal Record will be the first musical performers featured in the inaugural house concert series at Heritage Lake.

The show will be held in the Heritage Lake Activities Center on Aug. 21 beginning at 7 p.m. The cost is $10 per person.

The band plays a mix of folk, blues, jazz and originals, and has played at other local venues including Sweet Home Chicago restaurant in Brownsburg and the Keys, Strings & Other Things live music series in Danville.

No Criminal Record consists of Mike Moloy on guitar, Sam Carman on guitar and mandolin, and Rebecca Axsiom on violin. All three contribute vocals.

Mike "Noodles" Moloy took a shine to music as a kid, when DJs were spinning the wax of bands like Black Sabbath and Lynrd Skynrd.

He didn't lay his hands on his first guitar until after high school, but has since become addicted.

After being a member of the bands Old School and MurMuR, he joined No Criminal Record.

"Shifty" Sam Carman is a guitar, mandolin and harmonica player. Before joining No Criminal Record, he was in a band called Farrago.

Then she went on to the University of Texas and got a master's in music performance.

She's made a living since 1997 operating her own music studio and teaching music to children.

She was a member of Old School and MurMuR before joining up with No Criminal Record.

Reservations for the show are recommended, as space is limited.

To make reservations and get directions to the Heritage Lake Activities Center, call Kate Robertson at 386-2259 or e-mail her at katerobbie@sbcglobal.net.