Inn at DePauw has focus on community 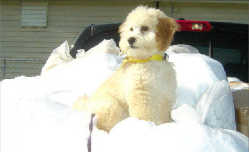 Tiger, the 4-month-old miniature golden doodle that serves at The Inn's mascot, was on hand as staff members of the hotel donated its old linens to the Putnam and Clay County Humane Societies. The Inn at DePauw has been under new management since July 1. Courtesy photo

GREENCASTLE -- Since it opened under new management about a month ago, The Inn at DePauw has strived to be a vital part of the community.

One way it has fulfilled that goal is by giving back to local community organizations, marketing manager Ashley Dora said.

When it purchased new linens for all 54 of its guest rooms, the Inn staff members, along with mascot Tiger, a 4-month miniature golden doodle, donated the old ones to the Humane Societies of Putnam and Clay counties on July 30.

The Inn also gave some of its leftover dry goods to the Away Home shelter in Greencastle.

"There's no use in throwing things away or wasting, so we want to get involved with giving back to the community in a positive way," Dora said.

Formerly known as The Walden Inn, the facility changed its name to The Inn at DePauw and has been under the management of Dora Hotel Company, one of Indiana's largest hotel management companies, since July 1.

"We've only been here for a little more than a month, so every opportunity we have we want to be involved," Dora said, mentioning the inn's recent participation in area Fourth of July festivals.

Since the name change, Dora said the Inn has felt a lot of support in the community so far, and anticipates a busier schedule once DePauw students move back to campus.

"We try to get as much feedback as we can," Dora said. "We're just trying to be a place of interaction for the university and community because the location is so great for both groups of people."

Everyone is invited to visit The Inn at DePauw is located at 2 W. Seminary St. in Greencastle. For more information or to book a reservation, call 658-1000 or visit its website at innatdepauw.com