Shortly after 3 p.m. Wednesday, traffic was backed up at least 30 cars deep on westbound State Road 240 at its intersection with Zinc Mill Road and Percy Julian Drive. The four-way stop went into effect Wednesday morning. Local motorists fear the problem will continue and even get worse during shift changes at Walmart Distribution and Heartland Automotive, as well as the beginning and end of the school day at Greencastle schools. 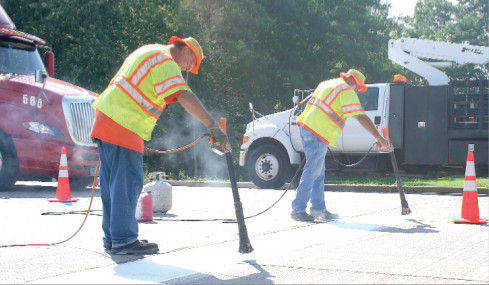 INDOT workers Gary Cross and Joseph Dark put the finishing touches on a stop line at State Road 240 and Percy Julian Drive and Zinc Mill Road late Wednesday morning. Highway crews spent much of the day installing signs and rumble strips, as well as painting new traffic lines.
Comments
View 58 comments
Note: The nature of the Internet makes it impractical for our staff to review every comment. Please note that those who post comments on this website may do so using a screen name, which may or may not reflect a website user's actual name. Readers should be careful not to assign comments to real people who may have names similar to screen names. Refrain from obscenity in your comments, and to keep discussions civil, don't say anything in a way your grandmother would be ashamed to read.
Respond to this story