By LUKE BEASLEY For the Banner Graphic 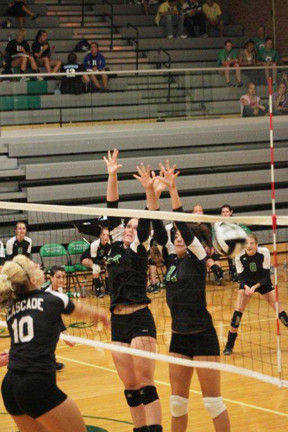 CLOVERDALE -- On the strength of several long serving runs and a hard-to-crack defense, the Cascade volleyball team took down Cloverdale in straight sets, 25-14, 26-24 and 25-13.

After Cascade asserted its will in the first set, it looked like more of the same to start the second as the Cadets took charge with a 7-2 lead.

But momentum swung with a 9-0 Cloverdale scoring run, and the Clovers found themselves with a 24-21 lead and needing just one more point to even the match. That point proved elusive, and Cascade reeled off five straight points on the blistering service of freshman Sydney Stein.

"We should have had that second game," coach Kathy Moore said. "Once you get past 20, you can't let up. We have to hit every serve in and play aggressively through 25, or a good team will make you pay."

And Cascade did just that, cruising to victory with a dominating final set.

Cloverdale's problems started early, especially on defense. The Clovers allowed too many balls to find the floor, as Cascade repeatedly attacked the void between Cloverdale's front and back rows.

Offensively, Cloverdale middle hitter Bradanne Toney was able to put away 10 kills and Holly McCammon added five more, but the Clovers could not sustain offensive pressure and string points together. Stacia Shepherd had eight assists, while Maria Oetken had three blocks.

"We're certainly making some progress, and tonight was better than Tuesday," Moore said. "I can see us making some headway with our passing and our serving, but we still gave Cascade too many free balls."

Cascade took advantage of those "free balls," which are essentially easy-to-return passes over the net, often setting up outside hitter Brittany Burdge, who was effective all night hitting cross-court and straight down the line.

"Most hitters at this point in the season are going diagonally, but she (Burdge) is an advanced player and was hitting the line," Moore said of the Cascade senior. "If you can do that right now, you're going to score some points."

Cloverdale will look for its first win of the young season Tuesday against South Vermillion.