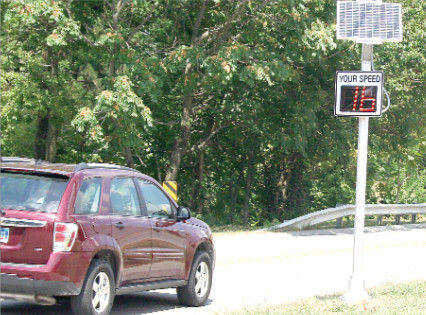 A motorist passes by the new driver feedback sign on South Jackson Street in Greencastle, safely under the 20 mph speed limit. The LED sign, which runs entirely on the power from the attached solar panel, is equipped with a radar gun and tells motorists their speed. Although the post in the ground is a permanent fixture, several posts will be installed around town, on top of which the detachable sign and solar panel can be placed. More details about the new sign will be available in an upcoming edition of the Banner Graphic. Banner Graphic/JARED JERNAGAN
Comments
View 9 comments
Note: The nature of the Internet makes it impractical for our staff to review every comment. Please note that those who post comments on this website may do so using a screen name, which may or may not reflect a website user's actual name. Readers should be careful not to assign comments to real people who may have names similar to screen names. Refrain from obscenity in your comments, and to keep discussions civil, don't say anything in a way your grandmother would be ashamed to read.
Respond to this story