Barn poetry meant to be 'food for thought' 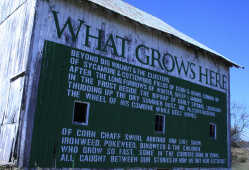 "What Grows Here," a poem written by DePauw University English and creative writing professor Joe Heithaus, was painted on the barn by Ken Torr for a World Hunger event at the Food for Thought festival in Indianapolis in November. The barn is located on West County Road 125 South.

GREENCASTLE -- Driving west from Greencastle on West County Road 125 South, one barn currently stands out from the crowd -- it has a poem painted in giant white letters on the side of it.

The poem was written by Joe Heithaus.

"It was a fun assignment, but it was kind of weird working with the knowledge it was going to be on a barn," said Heithaus, an English and creative writing professor at DePauw University.

Heithaus said he was happy not to have to be at the top of the barn.

"It's not for the faint of heart, being at the top part of the barn, by any stretch of the imagination," he said.

Heithaus wrote the poem about food production in the area for a Word Hunger event at the Food for Thought festival in Indianapolis in November. There will also be a video about the barns at the event.

Heithaus first had the idea for the poem after a community discussion at the Putnam County Museum, where Joyce Brinkman presented her idea for poets from around the state to create poetry that would be on the side of barns.

Brinkman said she wanted to assemble a variety of poetic representations of food and food production from around the state. She wanted these barn poems to both represent Indiana as a whole and the individual areas in which the barn is located.

"I wanted to put together a poetic patchwork quilt of the state," Brinkman said.

Heithaus drew inspiration for his poem from a variety of sources. He helped a local farmer with a harvest, riding along on a combine.

He said one local woman at the community discussion talked about how she enjoyed the dust being kicked up at a lightning storm.

"I talked some about how the kids in the country and the kids in town can have different experiences, and how we try and bridge that divide," Heithaus said.

Heithaus said he was encouraged to make the poem relatively long.

"You can't read it as you drive by," Heithaus said. "It's an invitation to slow down and read it all."