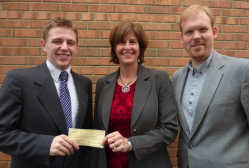 The men of the Lambda Fiji Chapter at DePauw University established this endowment to be able to make annual contributions to Putnam County charities.

The Fijis at DePauw have a long history of philanthropy in Putnam County since their founding in 1856.

In the recent past, they have hosted the Fiji Bark-B-Q that benefits the Putnam County Humane Society and the Fiji Pumpkin Bash that supports the American Red Cross.

They also complete numerous service projects and other fundraising events each year for charity.

The endowment was a top goal of the chapter for the past year, and they contributed $12,000 to make it a reality this fall.

"This endowment was important for our chapter so we could have an amount of money that would last forever and provide us a tool to have an impact on the Putnam County community every year no matter what happens," Archer said. "It also gives us a chance each year to discuss philanthropy and charities we want to support as a chapter."

"This endowment is a tool for the fraternity to teach philanthropy to its members and give support to local charities that members believe are worthy causes," said Elaine Peck, executive director of the Community Foundation. "Fiji should be congratulated as a leader in philanthropy on campus and in the fraternal world."

Anyone may contribute to the Lambda Chapter of Phi Gamma Delta Philanthropy Endowment or start a new endowment.

Contributions to the endowment are tax-deductible and should be made payable to the Putnam County Community Foundation with "Phi Gamma Delta" in the memo, and mailed to 2 South Jackson Street, Greencastle, IN 46135.

The Community Foundation was established in 1985 and administers more than 200 funds and endowments for donors, supporting a variety of charitable purposes.

To learn more about how to start a new fund or make a contribution, visit www.pcfoundation.org or call 653-4978.