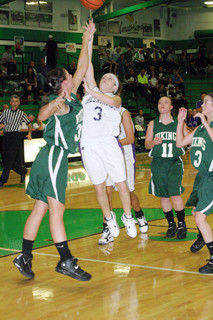 Alyssa Nichols (3) tosses up a shot against West Vigo Thursday. Nichols scored eight points for the Tiger Cubs in the final matchup against Terre Haute South.

The Tiger Cubs, coming off a win against the host school, was tested in the morning with a contest against Terre Haute North.

Though well contested by the Patriots, Greencastle led from the first quarter onward and won by 15 over the Patriots, 52-37, sending them to the tournament final.

With two Terre Haute schools knocked off, the Tiger Cubs got a chance to complete the hat trick against Terre Haute South.

It was a bit much to ask for, though, as the Braves were up for the challenge and ran away with the tournament title in a 68-39 rout.

The morning game with Terre Haute North was quickly seized by Greencastle thanks to Mallory Miller. The senior guard buried three 3 pointers and a late jumper to power the Tiger Cubs to a 16-10 first quarter lead.

With the lead, Greencastle was able to go back and forth with the Patriots throughout the second and third quarters. By the fourth quarter, the Tiger Cubs were able to utilize great free throw shooting to keep Terre Haute North from mounting any rally.

The 15-point win was good value for the Tiger Cubs, who then had a seven-hour wait before the tournament's final game.

There, Terre Haute South laid into the Tiger Cubs. While the score was close in the opening few minutes, South went on an 8-0 run to end the frame and left Greencastle staring up at a deficit that the Braves never looked like giving away.

Greencastle was able to hang in the contest for the rest of the half as the Braves held a 10 point edge going into halftime.

From there, however, the physical Braves were able to grind down the resistance of the Tiger Cubs and put them away quickly.

With scores of 18 and 21 in the final two periods, the Braves showed their strength in depth and skill. Led by tournament MVP Haley Seibert, South ran the Tiger Cubs ragged on offense while they put the clamps down on every Tiger Cub player defensively.

The final score of both contests reflected the games that the Tiger Cubs had and head coach Bradley Key saw both the good and the bad of his squad. Winning the first contest was a big boost in Key's eyes.

"I think it was great for our confidence. We have a lot of girls who haven't played a whole lot of varsity time. I thought they did a good job playing with adversity. They spent most of the third quarter and fourth quarter without Mallory Miller, who's our best scorer, and didn't lose the lead," Key said about the Terre Haute North game.

"Terre Haute South's a good team, first of all. I though we didn't have the fire that we normally had. Our big thing is go 100 percent, give effort, don't ever give up and even in the first quarter, there wasn't a lot of talking. I was disappointed in our effort but Terre Haute (South) is a good team," Key said.

"I thought we could battle with them a little longer than we did. I thought Mallory Miller played with a lot of effort tonight. We didn't have the enthusiasm we normally have. Maybe we're not used to seeing a team of that size. They have a great guard and we lost her a couple of times in the first half," Key added.

Though Southmont takes precedence next Tuesday, the experience will only help as the Putnam County Tournament looms this week, now being contested Thursday and Friday with North Putnam's football team playing in the semi-state the same week.

Even with three games against Terre Haute schools under their belts, Key is still cautious entering the county games.

"I don't think it gives us an edge. When you go into a county game, everyone knows each other. Last year South Putnam played us twice, both games were decided by six points. I think it helps me out understanding where we are early in the year and what we need to work on a little more," Key said about the experience from the week.

"That helps me out, but when you go into the county tournament, you never know what will happen."