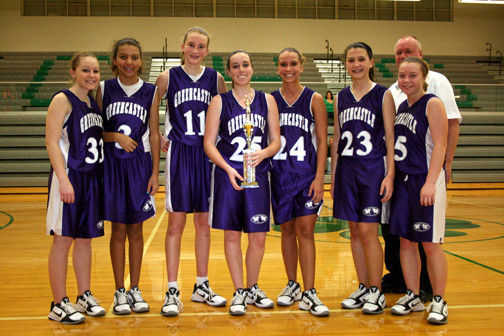 CLOVERDALE -- The popular misconception is junior varsity is the inferior step-sister to its varsity counterparts. The action isn't as good, there's not any scoring and because of that, the games are normally overlooked.

The Putnam County JV Championship game dispelled every one of those misconceptions and produced a high octane contest that had scoring runs, top-notch performances and gave the crowd at Cloverdale High School one heck of a game.

Greencastle and South Putnam got after it, but it was the Eagles who dominated play early. They scored nine unanswered points, however, the Tiger Cubs cut the lead to 12-9 after the first quarter. The game began with a big run and that would be the story of the game.

After trading buckets early, with the score 18-10 in favor of South Putnam, Greencastle went on its own run, a 17-0 run to be exact. When all was said and done, GHS had overtaken the Eagles for a 27-18 halftime lead.

GHS head coach Curt Cummings said there was no secret formula for the Tiger Cubs to come roaring back in the second quarter, it was just a fact of their shots beginning to fall. He wasn't sure how much of a run his team had went on following the game, but he knew it was significant.

"Oh man. When we first started this morning against Cloverdale, I didn't think we had a chance at anything. Then they (South Putnam) missed some shots. It's JV girls' basketball and that's what makes it fun," he said.

Jessi Covert led the Tiger Cubs with 11 points in the first half, but she would be held in check by an aggressive South Putnam squad.

Brooke Cundiff scored four points to kick off the Eagles second half as South Putnam cut into the Tiger Cubs' lead after posting an eight point third quarter to Greencastle's four points. Nikki York connected on 4-of-4 from the line for South.

In the final quarter of play, both teams traded baskets, with South Putnam outscoring GHS 8-7, but it was the Tiger Cubs who would hoist the Putnam County trophy and cut down the nets after the buzzer had sounded. 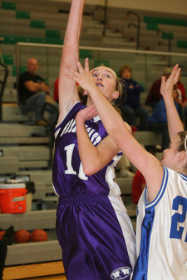 Greencastle freshman Melody White puts up a shot over South Putnam's Brittany Birt in the first half of Saturday's Putnam County Championship. White scored 12 points in the GHS win.
Order this photo

South Putnam head coach John Briones acknowledged his team's hot start, but thought his team's got tired late in the game and that had an effected on the outcome.

"We had a great start. We just jumped right out of the gate and got after them," Briones said. "(We were) moving the ball well, shooting the ball well and doing everything right and Greencastle picked it up in that second half. I think their intensity level, you could tell they weren't going to back down. They wanted it, I think, a little more than us.

"We were getting a little tired out there. We got some tired legs and I think that hurt our shots and affected some of our passing, but all in all I'm pretty proud of them. They hustle for me and they always do, you just have to want it more than the other team," Briones added.

Cummings said even when things were at their worst and his team was down in the second quarter, he didn't have any doubts they could pull out the game.

"I never gave up on them. They're workers, they work hard," he said.

Covert led all scorers with 13 points, followed by teammate Melody White with 12. Cundiff led South Putnam with 10 points, with Liz Comer and Aubrey Nichols chipping in eight points each.