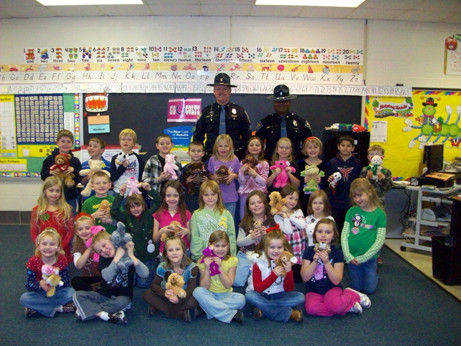 GREENCASTLE -- The Indiana State Police Post at Putnamville recently received a donation in the spirit of Christmas.

The intention of the gifts is for troopers to carry the animals in their patrol cars and provide them to children who are distraught after an event such as a car crash or crime.

Hoping to teach that it is better to give than receive, first grade teachers Kelly Newby and Tish Paugh arranged for children in their classes to collect the new stuffed animals and provide them to the troopers instead of having a gift exchange for themselves.

On Friday, Indiana State Police Sgt. Joe Watts and Senior Trooper DuJuan McFadden attended the class Christmas party and spoke to the children about various topics, including how thoughtful and beneficial their idea to help will be for others.

At the conclusion, the children presented the stuffed animals.

"This is our 10th year of providing the animals and each year our kids are so excited to be a part of something that will help children during bad times," Newby said.

The Putnamville District serves Clay, Parke, Putnam, Sullivan, Vermillion and Vigo counties. The animals will be dispersed to troopers patrolling all six counties and will benefit many children in times of tragedy.