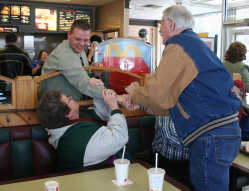 Banner Graphic/JARED JERNAGAN Frequent McDonald's customers Bill and Jane Sibbitt congratulate Bobby Hopper, left, after learning the Greencastle McDonald's manager had won the Ray Kroc Award for 2010. Named for the founder of McDonald's, the award is given yearly to the restaurant chain's top 1 percent of managers.
Order this photo

GREENCASTLE -- Greencastle McDonald's manager Bobby Hopper thought he was in a teleconference to talk about a presentation he has to give next month. That was when Indianapolis Region QSC, VP Bill McKernan dropped a bomb on him.

Hopper is a 2010 recipient of the Ray Kroc Award, given each year to the top 1 percent of McDonald's managers. They are rated in the areas of operational excellence, commitment to people and building the business.

"To me, this award is like winning a Heisman Trophy in college," Hopper said. "It's that big."

Hopper didn't just have his employees to share his joy with, though. He turned around to the cheers of nearly 20 family and friends sharing the moment.

As thrilled as Hopper was to have these people in attendance, he kept the focus on his employees and customers -- the kind of attitude that earned the award.

"This is the goal of a restaurant manager, but it's because of the employees, not me. It's what they do every day," Hopper said.

The customers lucky enough to be at the restaurant shortly before 2 p.m. Friday got the chance to not only congratulate Hopper, but also to share in the ice cream and cake that was part of the celebration.

Bill and Jane Sibbitt are daily customers of the restaurant. They said Hopper knows them well and is more than deserving of the award.

"We figured he should've gotten an award before now," Bill said.

Harry Porter, who was sharing a meal with his wife Ann and the Sibbitts, said Hopper should serve as a model for other managers.

"They ought to make a Xerox of him and get a bunch more of him," Harry said.

Hopper's bosses were also effusive in their praise.

"Bobby's positive, 'can do' attitude has given him the ability to deliver outstanding results," said Bob Jedele, Greencastle McDonald's owner/operator. "The results he has achieved in his restaurant with his workers demonstrate to others that goals can be accomplished. Bobby has influenced our entire organization and is a tremendous asset to our community."

"We are honored to congratulate the top one percent of McDonald's restaurant managers in the country," McKernan said. "We are proud to pay tribute to the best and brightest managers in our system for the critical role they play in delivering a truly outstanding restaurant experience."

Others sharing in the moment were field service manager Glossie Gardley, who even served the cake and ice cream, and operations director Astrid Delgado, via teleconference with McKernan.

The Ray Kroc Award comes with a cash award, a Ray Kroc award trophy and pin and a trip to Chicago for an awards gala this April.

Ray Kroc built the McDonald's business on the belief that greatness can only be achieved through the dedication and support of a company's people.

The award was named after him based on his commitment to people and recognizing their contributions to the organization he helped establish.

McDonald's owner/operators and regional staff nominate restaurant managers for the Ray Kroc Award to recognize their hard work, dedication and commitment to McDonald's.

From there, a selection committee of representatives from McDonald's operations, training and human resources select the top one percent of managers.