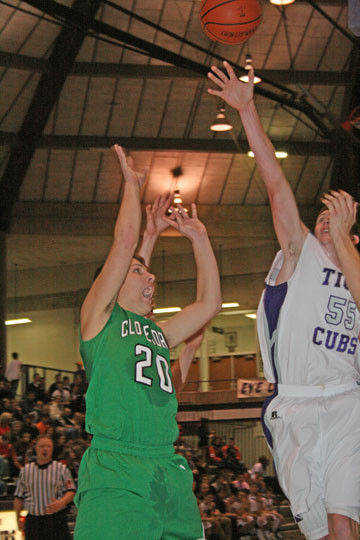 Cloverdale's Chuck Strunk connected on four free throws in the final seconds to ice the game for the Clovers Friday against North Putnam.
Order this photo

CLOVERDALE -- Though North Putnam rallied at the end and gave the Cloverdale boys basketball team a run for their money, the Clovers were able to hold onto their lead in the fourth quarter, beating the Cougars on Homecoming by a score of 49-45.

"It's always more special to win on Homecoming," said Cloverdale coach Pat Rady. "We really had a sixth man tonight."

Despite playing dominant basketball and handling North Putnam's strong press well throughout the game, the Cougars were able to come back in the fourth with several shots behind the arc. Travis Franklin, Garrett Porter and James Hedrick all shot a three-pointer in the final quarter that was instrumental in coming back from behind.

The Clovers were up by as much as 10 points at times in the first three quarters. North Putnam started the first quarter strong with a 5-0 run, beginning with a three-pointer by Hedrick, who led the team with 13 total. But after the run, Cloverdale brought the game to a 7-7 tie and pulled ahead with a lay-up by Donovan Scisney. Scisney had a strong game, finishing with 11 and proving to be a strong leader on the court. Scisney also scored the final baskets in the first and third quarters with the seconds winding down.

"I was very pleased with how we killed the press -- that was the key to the game," Rady said.

In the second quarter, Cloverdale began to pull away from North Putnam, leading 18-9 halfway through. North Putnam's shooters simply couldn't make a basket, missing several shots and letting good opportunities slip past them in the quarter.

"They've got some shooters," Rady said. "Good teams are going to make runs. They've been in every game they've played. You're not going to keep them down for very long."

The Clovers had a great day at the foul line, which paid off in the fourth quarter. Chuck Strunk was particularly clutch for Cloverdale, sinking all four opportunities he had at the line in the final minutes. With the score 47-45 after the Cougars' Porter made a three-point shot, Strunk hit both free throws to bring the team ahead 49-45 with 3.6 left on the clock and no timeouts left for North Putnam. A failed final shot sealed the Cougars' fate.