Cloverdale picks up first win of the year 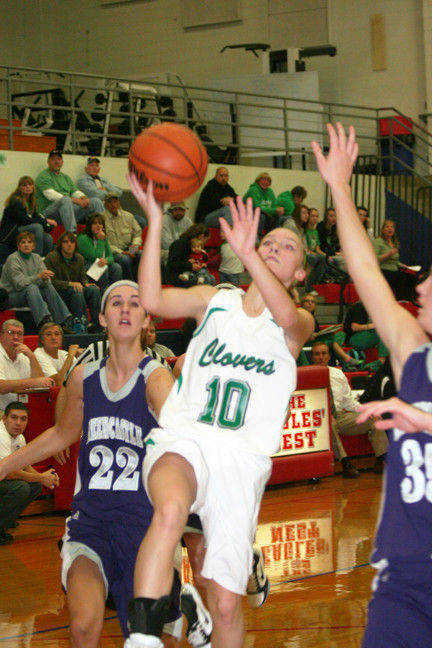 CLOVERDALE -- It's been a long season for the Cloverdale girls' basketball team, but now, they can say that they didn't go through the year winless.

Cloverdale picked up its first win of the season 43-39 thanks to a stellar second quarter where the Clovers outscored the North Putnam Cougars 13-3.

"I am so proud of the girls," said Cloverdale head coach Tom Andersen. "We still got a long way to go, but they found a way to do enough to get that win."

The game started slowly for both teams, with steals and missed passes aplenty. Paige Gruener made the first basket of the game with 5:42 left in the first quarter. But it was Bristy Skiles who lit up the first and second quarters, easily nailing three-point baskets. Skiles scored nine of the Clovers' 11 points in the first quarter off three three-point shots and ended the night with 19 points total.

"Look at the three's she hit in the first half, they're huge," Andersen said. "But she was also doing things defensively that she hadn't done before."

Gruener was all over the court defensively as well. She put up 16 points for the night and excelled in intercepting passes and stealing balls from the Cougars. Gruener ended the game with eight steals and also helped keep the Cougars at bay in the final seconds.

Despite being down 24-13 at the end of the first half, the Cougars came back with strong play from Megan Robinson and Morgan Robinson. Megan Robinson scored 14 and made several crucial steals in the fourth quarter that kept the team in the game. Morgan Robinson put up eight baskets and played strong off the bench for North Putnam.

"I think Megan Robinson played well," said Jim Brothers, head coach of North Putnam, "It was a coaching error not having her in for more minutes."

Though they never regained the lead after the second quarter, the Cougars pulled to within three, ending the quarter at 29-26. In the fourth quarter, Maggie Pinney brought the Cougars within one after Megan Robinson stole the rock, but the Clovers pulled ahead with big steals and a scoring run of their own, up 36-30 with 4:44 left. In the end, Gruener was able to sink two free-throws with less than 30 sec onds left that helped ice the game for the Clovers.

The Cougars committed multiple turnovers in the loss, bringing them to 3-12 on the season. North Putnam will host Western Boone today at 2:30 p.m. Brothers said he doesn't believe his girls played the way they should have played.

"I didn't think we played real well," Brothers said. "I didn't like how we came to play mentally. I don't think we were focused.