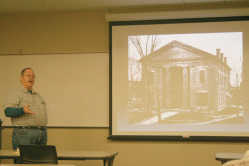 Ken Anderson gives a presentation on Putnam County's part in the Civil War. The Civil War Round Table of West Central Indiana meets monthly to discuss the history of the war.

GREENCASTLE -- The Civil War Round Table of West Central Indiana meets in Greencastle, currently at the Ivy Tech building, monthly.

"I really think it's one of the hidden treasures around here," said Louis Baldwin, the group's treasurer.

The Civil War Memorial at Forest Hills Cemetery lists all of the soldiers who died in the Civil War from Putnam County. Ken Anderson with the Civil War Round Table of West Central Indiana said additions had to be made to the list because some names were left off.

The group began in 1984, when Steve and Brenda Pierson and Dick and Wilda Skidmore returned from an Indianapolis Round Table meeting and talked about beginning a chapter located in Putnam County. In May of that year, the first meeting was held.

Anderson said that he first became involved with the group in 1998, but his Civil War interest goes back much farther.

"Loraine and I were married back in 1962," Anderson said. "We sat down and started filling out the family bible genealogy section and got hooked on it. I had never really considered whether or not my family had ever been involved in the Civil War since we lived out west.

"The more we dug into it, the more we found out that we had a really rich Civil War family history," he said.

A coworker expanded Baldwin's interest in the Civil War.

"I was always interested in history, and I was interested in the Civil War sort of broadly. Then a guy I was working with was really into it, and he sort of pulled me in. He gave me a book to read, and I was hooked," Baldwin said.

Anderson said his interest in the Civil War has continued for so long because of how he sees its influence on modern America.

"It is probably the single most significant factor in shaping what our country is like today," Anderson said. "If you look at the early history of slavery -- I don't care what anyone says, the Civil War was fought over slavery - you look at what's going on today, and we're still fighting the battle."

Anderson said the ways in which the cultural divide is fought have changed, but he sees the Civil War as the origin of many of today's cultural battles.

"We haven't had slavery for 150, but we're still fighting the battle.

"It's gone from north and south to today being more black and white or the northeast liberal set and the southern conservative. It all revolves around the sectarianism that came about because of the civil war."

Anderson said, in his time in the Navy, people would have arguments that showed the hold the Civil War still had.

"Every night they fought the war again in the barracks," he said

Anderson's presentation on Feb. 22 focused on three soldiers from Putnam County, then moved into some interesting facts about Putnam County and the war, including an anecdote about the Civil War Monument at Forest Hills Cemetery.

"Inscribed around the outside of the pedestal are the names of 320 soldiers from Putnam County who died during the Civil War," Anderson said. "There was a problem. Not all of the soldiers got on the monument. In 2001 a bronze plaque was added to include the names of guys who had been missed the first time around."

Both Anderson and Baldwin said the group brings speakers from a wide variety of locals and backgrounds.

"We've had speakers from other round tables in the area," Anderson said.

"We've had guys in from as far as Washington D.C.," he said. "We had Ed Bearss, who was the historian for the National Park Service come in."

Anderson said, depending on the distance traveled, the group sometimes offers to reimburse people for expenses.

"It depends on who it is. With Bearss, we had to pay for his expenses to get him out here, but he does most of that stuff for free," Anderson said.

He also mentioned Author Craig Dunn as someone the group has brought in.

"He came down for a dinner," Anderson said. "All the authors we treat to dinner. Some of them, we'll put up for the night. With the economy what it is right now, we'll often give them a stipend of some sort."

Anyone can attend the round table meetings as a guest. The cost to join the group is $20 for a couple, $15 for a retired couple, $15 for one person and $10 for one retired person.

The next round table meeting will be at 7 p.m. on March 22 at the Ivy Tech building in Greencastle.