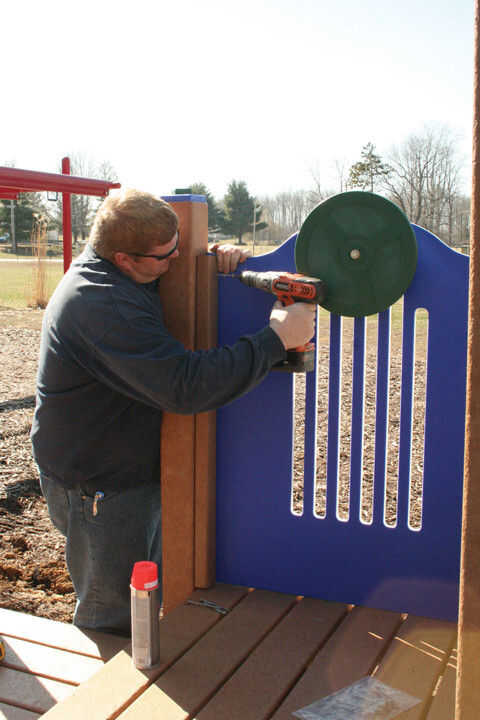 The Cloverdale Civic League, with help from First National Bank, had a new playset installed Wednesday. Geoff Krohn with G &C Contracting work to put the set together.

A new playset in the Cloverdale Community Park finishes a playground project that first broke ground in 2009.

The playset, which is designed for children 2 to 5 years old, is next to a sister set aimed at older children. Both projects can be traced back five years to the beginning of the Cloverdale Civic League, according to Angela Ladd, the president of the civic league.

"We always knew that we would get the toddler unit for ages two to five," Ladd said.

The playsets together represent the second phase of a 3-part plan the civic league began at it's inception to improve the recreation options for kids in the area.

To improve the options for children, Ladd formed the civic league in 2006.

As the civic league moved forward, their funding shifted.

"Originally we did all sorts of fundraisers. Penny drives, auctions, cookbooks, anything we could think of," Ladd said.

The funding for this portion of the project came from land that First National Bank donated to the league. The land was then sold to fund the new playground. Another $1,000 came from the Cloverdale Park Board, towards new mulch.

Ladd said the next projects for the civic league include some repair work on soccer fields, and then getting paved walk paths for the park. Another property sale that is being completed will fund those projects.