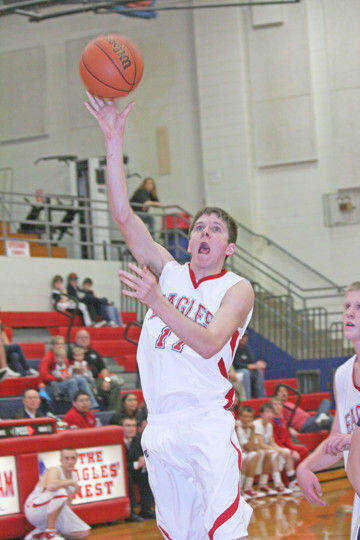 South Putnam's Justin Bumgardner led the Eagles with 10 points in their 61-28 sectional loss to Tri-West Wednesday.

GREENCASTLE -- Coming off an emotion regular season ending win over North Putnam, South Putnam entered their sectional contest against Tri-West riding high. However, the Bruins controlled the game from the opening tip and advanced with a 61-28 win.

The Bruins jumped out to a 10-0 lead to begin the game, including a dunk from senior Tyler Waite from a pass off the backboard from Austin Hendershot. Tri-West continued to score and earned a 19-4 lead after one quarter.

"Coach (Adam) Bontreger does a great job with his kids," South Putnam head coach Micah Elliott said. "They came out and defensively took us out of everything that we could do. Their pressure really hurt us and exploited us. They're very good."

South Putnam fell victim to the Bruins' press the entire first half. The Eagles scored four points in each quarter on 3-of-16 shooting and could only watch as the Bruins continued to fire on all cylinders.

Finding themselves down 39-8, South Putnam had every reason to begin looking to the off-season. Instead, the Eagles continued to go after the Bruins with all they had and show the heart and competitive nature every coach desires.

While they battled hard, South Putnam was never able to cut into the Bruins' lead. The Bruins went on to win 61-28 and dropped the Eagles to 2-19.

Justin Bumgardner provided a positive force for South Putnam, scoring 10 points in the game and grabbing, or keeping alive, multiple rebounds. Elliott was pleased with the effort his team gave on a night where even the smallest things seemed to be a struggle.

"He (Bumgardner) did a nice job of playing both ends," Elliott said. "He's got a competitive spirit and he doesn't like to lose. None of our kids like to lose. Our kids want to win as bad just as badly as any other kids, but we need to do a better job of preparing ourselves in the off-season so that we have the opportunity to succeed.

"We didn't pack it in and we haven't packed it in all year," Elliott continued. "There's been some obstacles that we've had to overcome and different things, but each day our kids came in and played hard and practiced hard. That was a good thing for me as a coach is that I knew after every practice we got a little bit better."

The Eagles graduate four seniors, so looking forward to next season, Elliott said it's up to them to put in the work in the off-season to achieve the things they'd like to next year.

"I think our younger guys really got better this year," Elliott said. "Our junior varsity team competed in a lot of game -- won a lot of game -- and that's something to build on. You have to go out and you have to play a lot of basketball. And it's not just playing in the gym, it's playing at home, it's doing the shooting drills, doing passing drills, it's doing the ball handling drills.

"Coach (Pat) Rady says it all the time, the kids have to put the effort in. Hopefully our kids are understanding and we really do a better job of working with our kids and developing them," Elliott said.