BY LUKE HOLT, For the Banner Graphic 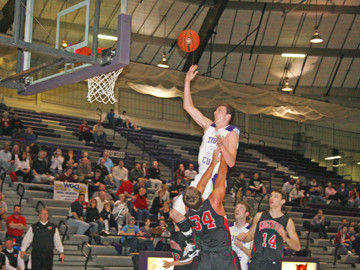 Greencastle junior Nick Hutcheson, shown here against Edgewood Tuesday, scored 26 as the Tiger Cubs were narrowly defeated by No. 6 Sullivan in the sectional semifinal Friday.

GREENCASTLE -- The Tiger Cubs suffered a heartbreaking loss to the Sullivan Golden Arrows Friday night in the semi-final round of sectional play. In what was the most thrilling game of the sectional, GHS fell short by two points. The final score was 70-68.

Sullivan got off to a quick start scoring on their first two possessions of the game, while GHS appeared to be a little nervous and hesitant with the ball. However, things would soon change.

SHS was going cold from the field, as they struggled to shoot against the Greencastle hard-pressing defense.

Hayden Stuckwish made a three-pointer, and on the following possession, Nick Hutcheson dunked the ball, electrifying the crowd and giving momentum to his team. Those two plays ended up igniting a 12-0 run, making the score 12-4 in Greencastle's favor. It seemed as though GHS was picking up where they had left off against Edgewood.

Another factor plaguing the Golden Arrows, besides the Tiger Cubs' defense, was foul trouble. They had six fouls after the first quarter.

The score after the first quarter was 16-10 in favor of GHS.

Greencastle's momentum would carry over into the second quarter, as they soon went up by 11 points making the score 29-18, and forcing SHS to call a time-out.

Shortly after, Stuckwish was on a breakaway and got fouled as he was in the air trying to shoot the ball. As he was in the air, he threw the ball behind his head in a circus shot, and the ball went in He converted on the free throw, to make it a three-point play. Sullivan's shooting struggles continued, as they could not seem to buy a basket.

Then, on the last possession of the half, Hutcheson hit a jump shot at the buzzer giving GHS a 34-21 lead going into the locker rooms.

Everything seemed to be going in favor of the Tiger Cubs.

The third quarter was a different story, as it proved to be detrimental to the Tiger Cubs' season.

The Golden Arrows looked strong coming out of halftime, while GHS looked a little sloppy, committing multiple turnovers and fouls.

Leading SHS was Rhett Smith, a junior, who has already signed to play for Indiana State University. SHS went on a 13-2 run, making the score 36-34.

The tables were turning, and soon the game was tied at 41-all with 2:20 remaining in the third quarter.

Then, GHS took a big hit as Hutcheson picked up his fourth foul with thirty seconds left in the quarter.

It turned out to be one of the key factors of the game, as Sullivan took advantage of Greencastle's foul trouble, getting multiple easy baskets in the paint that were hardly contested.

"Our guys were so backed up against the wall with those fouls, and Nick eventually fouled out. Three times in a row I didn't feel like he was able to go after Smith at all, because he was afraid of getting his fifth foul", GHS head coach Troy Greenlee said.

Sullivan was led after three quarters of play, 48-45.

Starting off the fourth quarter, Smith dunked the ball on SHS' first possession putting his team up 50-45.

But then Hutcheson answered on the other end of the court with his own dunk. The crowd was going wild, and the Tiger Cubs were lifted up from the grave. But Smith was proving to be more than the Tiger Cubs could handle.

He was scoring again and again, as he went on his way to put up 40 points.

The game was becoming intense and fast-paced. Bodies were flying all over the court. There was no doubting the passion each team was pouring out.

Then the inevitable happened, Hutcheson fouled out with 3:54 left in the game. Things looked troubling, as Sullivan was maintaining their five-point lead, and GHS lost their big man.

However, despite some struggles, GHS would not go away. They fought back and tied it up at 59-all with 2:04 left to play.

Shortly after, SHS pulled away with another 5-point lead. And with a minute left, GHS was forced to foul. SHS missed their free throws, then Tyler Lewis hit a 3-pointer cutting it to two with thirty-five seconds to go. The Tiger Cubs were hanging on by a thread. But soon enough they ran out of string, and SHS capitalized on their free throws putting the game out of reach. The final score was Sullivan 70, Greencastle 68.

Despite the devastating loss, there was no doubt about the effort that was given by GHS' team.

"The game of basketball is a game of skill, and sometimes skill takes over a game, but also, if your kids fight, like I thought our kids did tonight, we gave ourselves chances, and as a coach that's all I can ask for," Greenlee said.