Villopoto runs away with Indianapolis SX 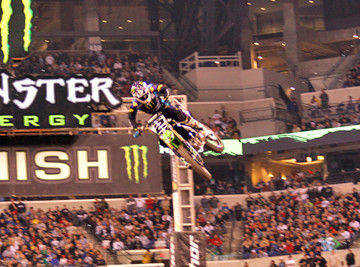 INDIANAPOLIS -- Ryan Villopoto ran away with the AMA Monster Energy Supercross, winning by 6.3 seconds over runner-up James Stewart on Saturday before a crowd of 60,789 at Lucas Oil Stadium.

Villopoto is starting to run away with the championship, too. It was the third straight victory and fifth in 11 events this season for the 22-year-old from Poulsbo, Wash. He's built up a 26-point lead, 221-195, over Stewart with six events to go.

"Things are coming together, but I'm not going to start thinking that way (points) just yet," Villopoto said. "We have some races left and a lot of laps left and mistakes can be made that we need to try not to make."

Villopoto, a factory Kawasaki rider, knows the consequences of mistakes that become crashes in the rough-and-tumble world of Supercross. He was challenging eventual champion Ryan Dungey for the points lead with four races to go last year and broke his leg and ankle in a crash in St. Louis. It undoubtedly broke his heart, too, to have lost the opportunity to take his first Supercross championship.

Stewart owns two Supercross titles, in 2007 and 2009, but missed the 2008 and 2010 seasons with injuries. He was riding hurt, too. Stewart crashed hard the previous week at Daytona and said he "wasn't quite 100 percent" with a sore back. The 25-year-old from Haines City, Fla., didn't get back on a bike until practice Saturday.

"The killer is just not riding all week," Stewart said. "I just didn't have it tonight. I tried my best to make it happen, but in the main event, I wasn't as sharp as I needed to be and it cost me the race. I feel sore in the back, it's pretty tight. To not ride and them come into a technical track like this...I'm just frustrated."

Villopoto chased Australian Chad Reed, a two-time Supercross champion, for the lead for most of the first lap. With two turns to go, Villopoto passed Reed in a hairpin-like left-hander to take the lead and was never threatened in the 20-lap race.

"The track was scary and really quick," Villopoto said. "It went away and the ruts made it hard to do 20 consistent laps. It was hard to do a lap without making mistakes. You really had to be smart out there."

Stewart was fifth at the end of the opening lap.

"I got tangled up on the start and was able to pass some bikes," Stewart said. "My start definitely didn't help. I lost the race in the first five laps. I made a few mistakes. You can't win it like that when a guy is out front. It's not even a race."

Stewart, on a Yamaha, was fourth by the second lap. Dungey was third and spent the next eight laps pressuring Reed. But on the final turn of the 10th lap, the front wheel of Dungey's Suzuki hit the rear wheel on Reed's Honda and Dungey fell off the bike. Stewart moved into third.

Stewart closed on Reed and passed him on the 12th lap. He trailed Villopoto by 6.6 seconds.

"I believe I can pressure him (Villopoto) into making mistakes, but I was too far back to do that," Stewart said.

Villopoto ran a pace to maintain his lead.

"I was just making sure my lap times when I spotted the pit board were equivalent to his (Stewart's) and making sure he wasn't gaining on me," Villopoto said. "If he's gaining on me, I need to turn it up. You can see where each other are on the track and I was just gauging where he was at. I tried not to ride over my head."

It was Villopoto's 14th career victory in Supercross and 12th in his last 25 starts. Villopoto is 13th on the all-time list. Next in line is Frenchman Jean-Michel Bayle with 16.

Stewart believes it's still possible for him overtake Villopoto for the championship.

Sipes pressured leader Blake Baggett for the first half of the 15-lap main. Baggett, of Grand Terrace, Calif., crashed off the jump at the finish line into barriers at the bottom and Sipes took over the lead and led to the checkered flag.

"I can't even describe the feeling right now," Sipes said. "What's weird is I didnt' think about winning until I saw the checkered flag and I think that had a lot to do with it. The last time I thought about taking first place while leading, I went down and handed over the lead. Tonight, I stayed strong and didn't think about it and it definitely paid off."

Supercross points after 11 of 17 events