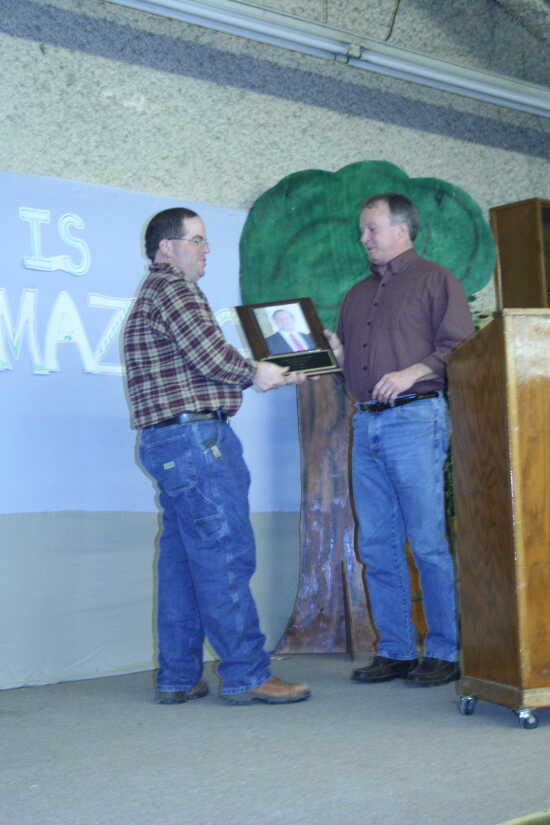 Banner Graphic/JOSH GARVEY Joe Mann, left, presents Jack Berry with his Farmer of the Year award at the Ag Day breakfast Saturday. Berry has been farming for around 35 years.

Berry was awarded the Farmer of the Year and Bailey, who was not present, was named the Friend of the Farmer.

Berry, who has been farming for roughly 35 years and was a local and state officer in soil and water conservation, said it was an honor to receive the award. 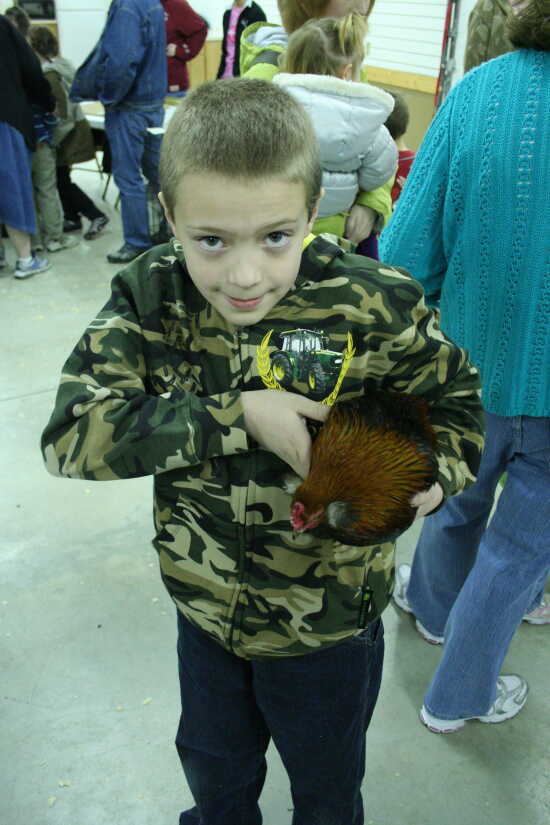 "I always looked up to the people who got this recognition in the past and I'm honored to be among those that wear that crown," he said.

Berry said winning the award was a "total shock."

"I was not expecting this whatsoever," Berry said. "I'd been more focused on school board and family issues the last several years so I've been a little bit away from my no-till experience days, getting that started in the county.

"I think that's where I really made my mark in agriculture. But that was 15, 16 years ago," he said. "I've been a little bit away from the groups that support ag."

Berry said he hopes to reemphasize agriculture in his life, especially now that he is no longer with the Greencastle School Board and two of his children have left college.

"I don't feel obligated (to focus more on agriculture because of the award), but I feel like I've put ag on the back burner because of my other responsibilities. ... I'd like to get back to some ag aspects of the community."

Berry said his wife Janae had a hand in getting him to the awards ceremony.

"She kept suggesting strongly that 'we haven't been in a while, they've changed the time, it's not during the week when you're busy,' I think the change of time was part of the pull of getting me here," Berry said.

"Now that I look back I can see she was dropping some pretty big hints that we should be here. She got me pretty good, actually," Berry said.

After Berry won the award, people came up to say congratulations. Berry, with a large smile, asked some of them, "Did you have anything to do with this?"

Joe Mann, the president of the Putnam County Farm Bureau, handed out the hall of fame awards.

"I think everyone in here knows Roger. He headed up this portion of the program for a number of years for the hall of fame. He was also the administrator of the Farm Service Agency office here in Greencastle," Mann said.

"Roger was a great friend to farmers, helping them negotiate all the intricacies of working with federal government," Mann said.

"I would say normally we have maybe 200 people. I don't know how many we had here today, probably at least 250, maybe higher. I think we had 240 seats set up and it was pretty full, plus a lot of people on the sides and back," Carrington said.

During the presentation, Carrington said that sleeping in some was the real reason for the change.

A mini farm fest was staged next to the area where the presentation and breakfast were held. A number of animals were gathered for children to pet, with dwarf goats a favorite. Automated pig races and a ball throw were also available, designed to draw the interest of the next generation of farmers.