By JASON MOON For The Banner Graphic 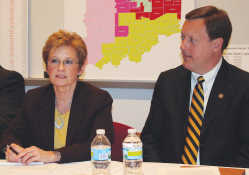 The meeting took place at the Rose-Hulman Institute of Technology, Terre Haute, and was one of eight meetings set up statewide scheduled for Friday and today.

Redistricting of congressional lines takes place every 10 years and is conducted in conjunction with the Census. The districts are drawn every decade based on population data. The goal, according to legislators, is for each district to have the same population to provide equal representation.

The public hearing was intended to give the public an opportunity to provide input to their representatives.

Koch said the deadline for redistricting is at the end of the current legislative session in April.

He said the meetings with residents would be taken seriously.

"We will compile the data and then begin work on new districts," Koch said.

Hendricks County resident Tom Hansen told the panel of legislators he believed they were going about the process the wrong way.

Hansen said a press release provided at the forum Friday stated individuals could provide information on how to redistrict all 100 seats for the Indiana House of Representatives and all 50 seats of the Indiana Senate. However, Hansen pointed out there was no place in the Indiana Constitution that stated the state had to have 100 house seats and 50 senate seats, but rather, the state's constitution stated there will be no more than 100 house seats and no more than 50 senate seats.

"You must start with a clean slate," Hansen said. "The districts belong to the people. Make compact districts and the people will be served. Draw the lines and serve the people."

Former state representative Vern Tincher, a Democrat who represented District 46 for several years, said he believed the districts could be more "compact."

"You have a big job ahead of you," Tincher said. "I wish you good luck, but try to be more compact."

"We're concerned to make sure the maps are drawn correctly," Chase said. "But I know it's a very complicated process."

"I grew up in a rural area and (Burbrink) is absolutely right," Heaton told The Brazil Times.